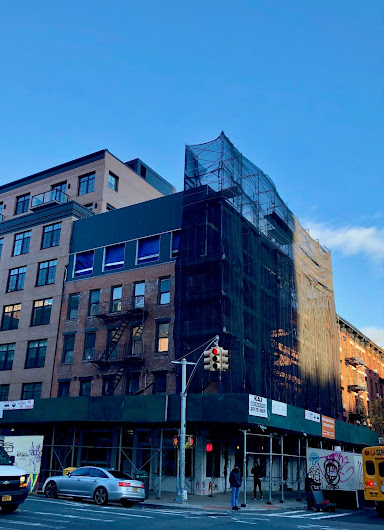 Workers have removed part of the construction netting at 94-96 Avenue A, revealing the new floor on the building here on the northeast corner of Sixth Street... 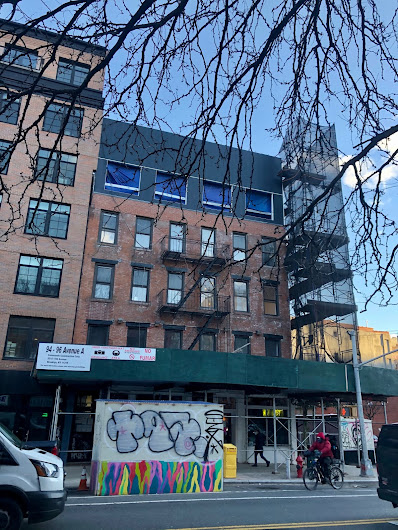 According to the approved permit, the work includes an interior renovation of the fourth-floor apartments and an addition of a fifth floor. The three buildings in this assemblage/zoning lot — 94 Avenue A, 96 Avenue A and 501 E. Sixth St. — were combined into one, per the permit.The building's current square footage will increase from 8,304 to 10,151. Despite the expansion, the taller No. 94-96 will have 10 residential units instead of the current 11. The filing also shows that there are plans for a roof deck.This corner was home for 32-plus years to the Sidewalk, which closed in February 2019.  Penn South Capital paid $9.6 million for the property in March 2019, per public records. Pini Milstein, who retired, was the principal owner of the building as well as the operator of the Sidewalk. A bar-restaurant called August Laura opened in the building's retail space last October. Previously on EV Grieve:• 1-floor expansion planned for Avenue A building that housed the Sidewalk• The building housing the former Sidewalk sells on Avenue A
Posted by Grieve at 5:40 AM

Are there still tenants in that building, or were they bought out?

Seems not one architect has figured out how to add a floor or two without it looking freaky.

Looks terrible! Who signed off on this design lol

Is that a shipping container penthouse?
Imagine all the dirt and grime in the crack between the two buildings.

I hope they leave the sidewalk scaffolding; it looks about as appropriate as that top floor. (Without it, the building will look naked.)