An end of the ride: Busy Bee Bikes closes on 6th Street 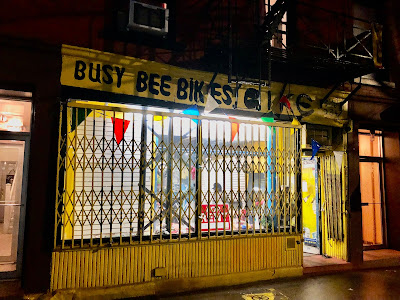 Busy Bee Bikes has ended its long tenure at 437 E. Sixth St. between Avenue A and First Avenue.
A for rent sign hangs in the window of the yellow storefront with the handpainted signage, and the space was emptied out over the weekend. On Saturday evening, workers inside the storefront told an EVG reader that they were closed for good.
Several years after debuting, there were some claims that the shop pedaled hot property. And in early 2010, as The New York Times reported, Busy Bee was busted for buying stolen bikes at the time... reopening "after a $4,000 fine and under court-ordered stipulations that include random inspections and severe restrictions on purchasing used bikes."
An owner, the Times reported, was Joseph Malewich, a former NYPD detective. He opened the shop in 2004 with local bike legend Emey Hoffman, who died in 2009.
Busy Bee joins some other bike shops to close in the neighborhood in recent years... including Bikes, By George! ... Landmark Bicycles ... and Danny's Cycles.
As for other shops in business:
• Bfold Folding Bicycles, 224 E. 13th St.
• BikeFixNYC, 334 E. Sixth St.
• CC Cyclery & Co., 530 E. 13th St.
• NYC Velo, 66 Second Ave.
• Trek Bicycle Bowery, 303 Bowery
• Wing Bikes, 345 E. 12th St. (high-end ebikes)
Posted by Grieve at 5:00 AM

I had a bike wheel stolen around 2010 and the 9th precinct police officers who responded drove me directly to BusyBee where they went in and asked if anyone had tried to sell it to the store.

I had no idea about the sketchy past. I always made it a point to walk by to check out their windows. They had a cool chopper bike on display for awhile.

These shops would remain if their prices weren’t so astronomical for the subpar quality you find at them. Just because there was a shortage doesn’t mean we need to inflate the market because we can.

CC cycles is small and out of the way but they've done me right for the past decade plus, going back to their previous spot on Ave B. Always ready to help and never pushy or snarky.

CC Cycles and Trek are so much better than Busy Bee ever was. As soon as I walked into that place for a repair I walked out, it reeked that bad. After looking at their Yelp reviews I was surprised they were in business at all. Plus they were caught buying stolen bikes, so if they fixed tour bike one day they could be selling it the next. The owner was a former cop so of course they got off with a small fine, but they probably should have been shut down or at least someone arrested. People used to find their stolen bikes sold to local restaurants only to find out that they were purchased from this operation. Hopefully a reputable bike shop will open up someplace, but there are plenty others around.

And some people praise Citibike. Which are killing off small bike shops.

you forgot to mention Bikeman,for good and honest family Bike shops. He's on Delancey, Between Clinton & Attorney.
He just fixed 3 things on my bike two of the other shops you mentioned were telling me I needed to replace.
https://www.bestdealbike.com/visit-us

The one time I walked in there looking to buy a bike (2017 I think?) they were incredibly rude. Never went back.

This was my go to bike shop. They provided quality work at reasonable prices. It is very sad to see them go. I never knew about there troubled past. Very unfortunate.

Too Bad, they were a good shop, staffed by nice folks and had good prices on repairs. I don't like buying all my bike parts (tubes, tires brake pads & Cables ) off the web.

Bikes By George is back. isn't he? 4th Street

Sad this was my go to