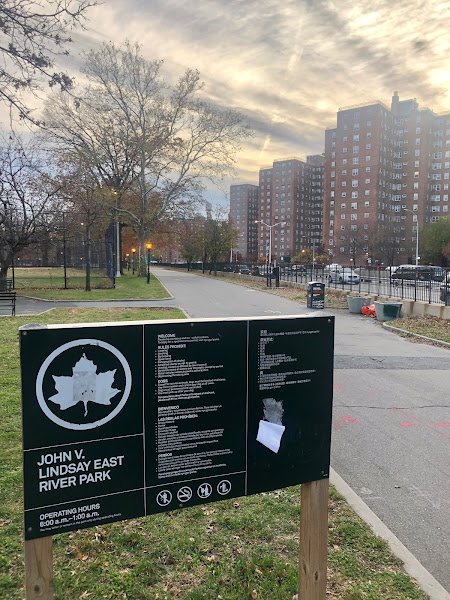 Starting today, the greenway that runs parallel to the FDR and along East River Park will shut down up to 10th Street Street, according to the weekly construction bulletin.
Workers closed the greenway between Montgomery and Stanton streets starting on Dec. 6. The bulletin notes that workers will "finish protective fence installation" along this corridor. (Click on the image below for more detail) ... 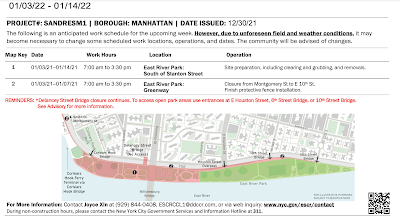 Park entry will remain at Houston, Sixth Street and 10th Street. The city has said they will maintain public access to a minimum of 42 percent of the park throughout construction, expected to be complete by the end of 2026.
To date, work on the $1.45 billion East Side Coastal Resiliency project has focused on cutting down trees and demolishing all the amenities (for a while in defiance of a Temporary Restraining Order), including the amphitheater, below Stanton Street.
On Dec. 31, photo-journalist Nathan Kensinger filed a "Goodbye To East River Park" essay for Gothamist.
An excerpt from the article highlights the slapdash nature of the work to date:

The de Blasio administration has left behind a decidedly mixed climate change legacy, and one of its largest shortcomings has been falling behind on billions of dollars of coastal infrastructure projects initiated in the aftermath of Hurricane Sandy. This last-minute destruction of East River Park has proved to be disruptive and lacks the transparency and safety measures usually seen at city demolition and construction sites.
Visitors to the park, including bicyclists, joggers, skateboarders and wheelchair-bound retirees, were left befuddled by the sudden closure of its southern entrances and paths.
No official construction signs, project descriptions or permits were mounted at the demolition sites. Clouds of dust rose up from the removal of the amphitheater's aged concrete, behind a flimsy barrier of dilapidated fences and caution tape.
As one of the final acts of the de Blasio administration, the demolition of East River Park marks the last chapter in the mayor's climate change legacy, ending his term on a controversial note, and leaving his successor with a messy process that will take years to complete.

The current plans call for gutting East River Park — burying the existing 57.5-acre land under fill and elevating it by 8-to-10 feet above sea level while also cutting down 1,000 mature trees. The new park is expected to protect the Lower East Side from storm surges until at least 2050.
However, as the Gothamist piece notes, "if sea levels rapidly rise, the park may need to be demolished and raised again."
---
Concerned community members are gathering this morning at 8 at the Houston Street entrance. They are coming together "in protection of East River Park from this ecocide needlessly being carried out by the City with an extraordinary lack of safety measures in light of unprecedented conditions created by the COVID-19 surge and in the absence of any State, City or Federal Official or Agency willing to claim responsible environmental oversight."
Posted by Grieve at 5:09 AM

"City Proposes Two-Tiered Protective Esplanade to Protect Lower Manhattan From Storms"
"the city would break ground in five years at the earliest."
"the plan is still a long way from getting the green light. The project will be subject to an environmental impact review as well as local, state and federal approvals for construction permitting — an approval process that could take some time. The city allocates five or more years to get the permits approved, environmental review finished and initial design work done before beginning construction, according to the plan."

We don’t need to wait for climate change to destroy the environment, our local government is doing the job just fine on its own.