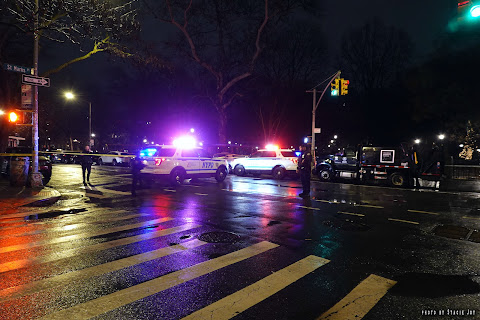 Photo Saturday night by Stacie Joy
The NYPD has released some information about the stabbing that took place New Year's Eve night around 10 outside 133 Avenue A between St. Mark's Place and Ninth Street.
Police and media accounts stated that "a 32-year-old man was standing in front of 133 Avenue A when a group of people approached him ... and one person from the group began arguing with him, according to the NYPD. The argument then led to a fight, and the assailant stabbed the victim in the head and chest before running away."
The Crime Stoppers tweet (the time is incorrect on the tweet — it was p.m. not a.m.) shows three suspects in the surveillance video...

WANTED for AN Assault in front of 133 Avenue A,. #Manhattan @NYPD9pct on 12/31/22 @ 10:10 AM After a verbal dispute an individual stabbed the victim in the head and torso before fleeing northbound on Avenue A on foot Reward up to $3500 Call 1-800-577-TIPS Calls are CONFIDENTIAL! pic.twitter.com/4as7vPjsWv 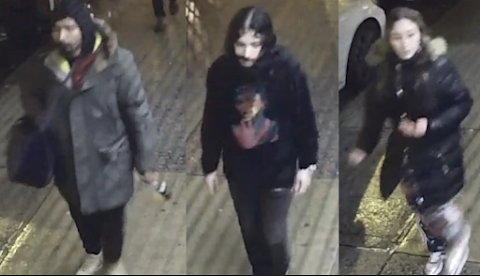 No word yet on a motive or condition of the victim.
Anyone with information that could help in the investigation is asked to call Crime Stoppers at 1-800-577-TIPS (8477). You may also submit tips online. All calls are strictly confidential.
Posted by Grieve at 5:00 AM

This is unfortunate that stabbing crimes go on in our neighborhood and most all of Manhattan - does everyone carry a knife nowadays? " Gee guys, I got to go back home, I forgot my knife " ----Bring back stop and frisk and beat cops

Certainly the over abundance of alcohol being served in the neighborhood has nothing to do with increase in stabbing, shootings and murders.

10:42 You are actually right. It has nothing to do with that.

The neighborhood has been full of bars for decades. One thing has nothing to do with the other. Stop the fear-mongering. And I'm surprised no one blamed this on curbside dining.

You went off script. The current thing is to blame it on the smoke shops.

Any update on this story? Can’t find coverage anywhere

What does it ah w yo do w bars?
More like Unstable people…

These 3 individuals have been posted outside of the vacant Thai place by Starbucks on ave A all summer drinking andcausing disturbances for the neighbors, being aggressive to anyone who asked them to keep the noise down , they have been the cause of multiple assaults and I suspect responsible for many of the stabbings that have happened on Ave A recently. Any one who is up in the morning over the last 6 months has seen these individuals on Ave A !