Another day, another small business closes to make way for condos 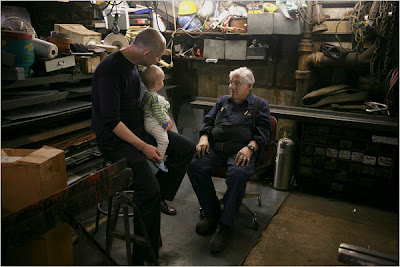 The headline from this feature in the Times says it all:

The shop, which opened in 1907 and had been run by three generations of the De Lorenzo family, closed yesterday.

Even today, the shop has plenty of work making custom furniture and fittings for the glitzy galleries and expensive lofts and apartments in the area, which is now known for manufacturing high-priced meals and cocktails. But no bending brake or arc welder or cutting torch can alter the hard economic fact that to the De Lorenzos — the third generation is now running the business — the place is worth more closed than open.

A developer seeking to put up a luxury condominium building has agreed to buy the De Lorenzos’ one-story building, a 30-foot-by-100-foot structure on Grand Street near West Broadway, said Thomas De Lorenzo, 84, who owns the shop with his son Thomas 2nd.

One more blow for the art community.

“This place is really the last of its kind in an area that used to have so many manufacturing businesses,” said Robert McDougle, a designer who has worked in SoHo for 30 years. He said he enjoyed and benefited from having a small metal shop with an experienced staff fabricate his designs and suggest methods and materials that expanded his vision as a designer.

“They helped many, many artists in SoHo,” he said, as the De Lorenzos and three longtime employees rushed to finish their last few projects.

Now, he said, he will retire to his house in Bay Ridge, Brooklyn. The price he is getting for the building is more than the business ever made in a century, he said, without revealing the amount.

There are beautiful photos by Chang W. Lee, like the one above, accompanying the article. I think Jeremiah wrote the very appropriate headline for the photo essay: A Remainder of SoHo's Industrial Past Vanishes.

Email ThisBlogThis!Share to TwitterShare to FacebookShare to Pinterest
Labels: dying a little more every day, mom and pop shops continue to close, more room for condos