Revisiting: "How many rich jerks that want to be in Sex and the City can there possibly be in America?"

I originally ran this post on April 9. But it seemed like a good thing to repeat, given what's facing us next Friday... 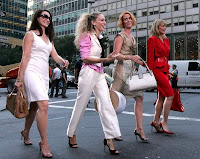 In a Q-and-A published at Gothamist today, singer-songwriter (and Brooklyn resident) Mike Doughty was asked: If you could change one thing about New York what would it be?

The forward march of the gentrification cold-front. But I keep in mind that gentrification hasn't been around forever, and is a trend, not a universal unstoppable force. How many rich jerks that want to be in Sex and the City can there possibly be in America? OK, a lot, but there's not a limitless supply. If the upcoming Sex and the City movie tanks, it will be for the societal good.

Meanwhile, back to the present...