A shooting on Avenue A 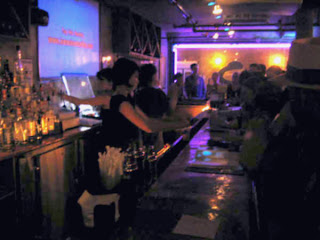 Was running a few errands around Union Square yesterday morning. Started talking to one store employee who mentioned that he lived on 6th Street between Avenue A and B...and he asked if I saw all the police cars on 6th and A early yesterday. I hadn't. He said cops and news crews were everywhere...and that one passer-by told him it was a double murder. Before I could say anything, he offered. "It's a really nice neighborhood." A pause. "There's no regard for human life these days." I went home to check this out. I didn't see a thing about this on any news site. Later yesterday, I heard from a few other folks that there was a shooting outside Sing Sing Karaoke on Avenue A around 3 a.m.
The Daily News has this account:

A bouncer at an East Village bar called Sing Sing Karaoke took a bullet to the chest early Saturday after breaking up a series of melees, police and witnesses said.

As someone belted out Elton John's "Tiny Dancer" on stage, Carlos Salome staggered into the bar around 3 a.m. screaming that he'd been shot.

"He was yelling, 'My arm, my arm!'" said playwright Marissa Kamin, who was inside Sing Sing at the time of the shooting.

Salome was in stable condition at Bellevue Hospital.

The bouncer had been standing outside the singalong spot at 81 Avenue A when two groups of drunks began brawling, witnesses said. "He whipped out his security badge," said a worker at a neighboring bar.

After going their separate ways, the beer-muscled brawlers returned, the worker said, and the bouncers stepped in again. Two of the men walked by the bar a few minutes later, he said. "They walked to the corner and started shooting," he said.

No arrests have been made in the shooting outside Sing Sing, which lists a song by the rapper 2 Pistols atop its list of new tunes and counts celebrities like Cameron Diaz among its customers.

"[Carlos] had good intentions," the worker said. "He didn't want to fight those guys."

[An aside: Was it necessary to mention that someone was singing "Tiny Dancer" ... and that the place has a song by 2 Pistols on its playlist?]

I'd like to know a few more details on the case (and not who was singing what...) and the aftermath. Perhaps Bob Arihood was able to capture some of this?
Posted by Grieve at 6:19 AM

I was there as well, but in a private room in the back. Next thing I know, everyone's told to get into the front area to be questioned by the cops--one by one. Nobody could leave and it was causing some strife. So, my friend and I got some shut eye in one of the rooms for a few hours until we finally sneaked out at 6:15am, with a large amount of people still there waiting to be questioned.