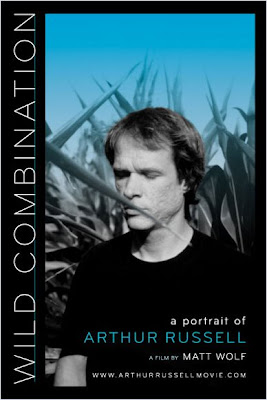 Happy to see so much press this week for something worthy of the attention — Wild Combination: A Portrait of Arthur Russell, the debut feature from Brooklyn-based filmmaker Matt Wolf. I had a chance to see a screening of this captivating documentary. I was only vaguely familiar with Russell, a talented player on the fringes of the downtown New York scene in the 1970s and 1980s. As many writers have noted in discussing this film, it's difficult to characterize what Russell was all about. (Part of what makes him so intriguing, of course.) He had a passion for all things related to music. He was a native of Oskaloosa, Iowa, who wore trucker caps long before they were, you know, ironic. He later became a Buddhist. He was an avant-garde composer and cellist. He liked the Modern Lovers and the Ramones. And he loved disco.

Upon arriving to New York CIty from San Francisco in the early 1970s, he collaborated with everyone from Allen Ginsberg to Philip Glass. Russell and his longtime partner, Tom Lee, lived on East 12th Street next door to Ginsberg. Richard Hell lived in the same building. (Lee, who first met Russell at Gem Spa on St. Mark's, still resides in the same building.) Going by Dinosaur (one of several monikers that he used), Russell wrote and produced “Kiss Me Again,” the first disco single released by Sire Records. Russell was later a co-founder of Sleeping Bag Records, which released hip-hop and oceanic dance music in the early 1980s. He wasn't afraid to admit that he wanted to be famous.

Russell died of AIDS in 1992. He was 40. He left behind thousands of partially finished songs that spanned every genre. His catalog was overlooked until recent years, when a series of reissues and tributes garnered the attention of a new generation. I hope the movie creates even more Russell fans. There are screenings of the movie tomorrow night at the Kitchen. It's sold out, but there are a few tickets available at the door, I'm told. The Kitchen is also hosting a celebration of Russell's music this weekend.

The Wild Combination blog has all the links to the recent articles as well as information on other screenings this summer.