Shocker: Rents are probably going up 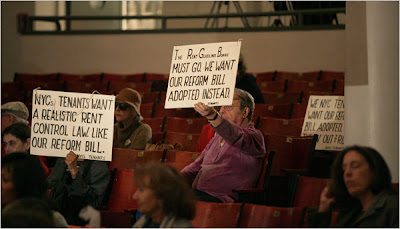 The board that regulates rents for New York City’s one million rent-stabilized apartments proposed a tentative range of increases Monday night that could lead to larger increases than last year’s.

The city’s Rent Guidelines Board recommended increases of 3.5 percent to 7 percent for one-year leases and 5.5 percent to 9.5 percent for two-year leases. The nine-member board will hold two public hearings on June 11 and June 16 and is scheduled to set a final number, not a range, at a meeting on June 19.

The board’s 5-to-4 vote left both tenant advocates and landlord representatives equally disappointed. A landlord group had called for higher increases, while tenant leaders, many of whom are pushing for substantive reform of the rent-stabilization system, supported a proposal by some board members for a rent freeze.

“I’m afraid it’s going to be higher than last year’s increase, and last year’s increase was way too high as it was,” said Barry Soltz, 51, the legal coordinator for the tenant association at the rent-stabilized Janel Towers in the Bronx. He was one of a few dozen tenant advocates at the meeting, which had a low turnout compared to previous years.

With so much at stake, the board's meeting at Cooper Union in the East Village drew the sparsest crowd in recent memory. It lasted just an hour.

"I want to know where everybody is," said Adriene Holder, one of two tenant representatives on the nine-member board, as she scanned an audience of less than 100 in a room that could hold five times as many.

Afterward, Holder said tenants stayed away because they've come to view the entire process as "a sham."