"A handful of its buildings may seem grimly picturesque, but for the most part this is unappealing New York" 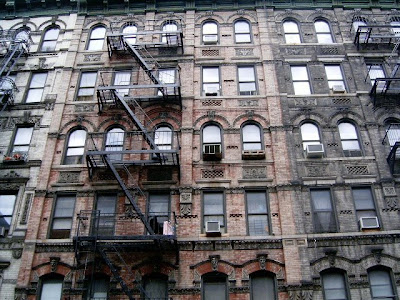 It's a reaction to the National Trust for Historic Preservation naming the LES in its 2008 list of America's 11 Most Endangered Historic Places.

Here's an excerpt from his column:

A new facet of globalisation is well-meaning organisations roaming the planet listing things as threatened or on the brink of extinction. They may be a beetle, a rainforest, a Buddhist temple or, it so appears, the spirits of a city's past. Two years ago the Indiana Joneses of Unesco fought their way up the Thames to be appalled by the Tower of London. They found its setting blighted - as if overnight - by ugly office blocks, qualifying it for the "world heritage in danger" schedule. Liverpool waterfront received a similar finger-wagging.

The Tower of London is one thing, the Lower East Side another. I have been a "poverty tourist" in many awful places and felt the mix of guilt, shame and astonishment at such human resilience. But it never occurred to me to want to "save" the street camps of Calcutta, the shanties of Bogota or the inhabited concrete ruins of modern Baghdad.

The Lower East Side is not in this league, but the principle is similar. A handful of its buildings may seem grimly picturesque, but for the most part this is unappealing New York, an environment of drab tenements, public housing and vacant lots, where only the lifestyle of the fleeing minorities infuses the streets with some visual interest. The concept of "endangered" here applies to an idea, that of a cultural and social fabric, and one that is inevitably transient.

Yet the appeal of that fabric to local residents and to New Yorkers in general is undeniable. This may be a New York churning with "comers and goers", but both residents and those new to the area seem to agree on one thing: they want something of its character preserved. Conservation has matured from saving buildings to seeing them as a proxy for communities, cultures and a sense of physical identity. It is reflected in the British yearning to "save rural communities" by subsiding houses and preventing sales to newcomers, the so-called "yokel in a smock" syndrome.
Posted by Grieve at 12:47 PM