"This is one of the last vestiges of the anarchistic, crazy Lower East Side" 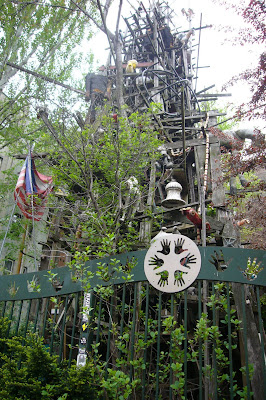 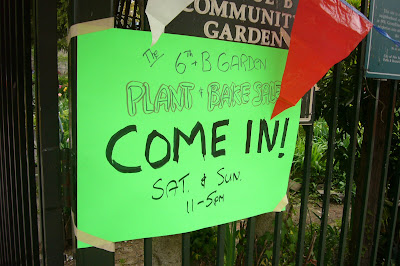 Jeremiah has the scoop that the Tower of Toys is coming down at the community garden at Sixth Street and Avenue B. This, of course, is the work of the late Eddie Boros, a lifelong resident of the East Village...not to mention a legendary regular at Sophie's. (A lot of his artwork still adorns the bar.) Mrs. Grieve and I just had a conversation about the tower over the weekend. The garden had an open, uh, garden on Saturday and Sunday. In the short time that I was there, I'd say some 20 tourists walked by and took admiring photos of Eddie's creation. However much we liked the sculpture, we wondered how much longer it would be part of the garden. (Eddie passed away in April 2007.) For starters, there was the community garden politics: Many people involved there hated the thing. Here's an article from The New York Times dated Nov. 22, 1998, by Karen Angel:

Junk Art Roils a Garden
The junk sculpture on Sixth Street and Avenue B looms above the surrounding tenements like a psychedelic treehouse. From its limbs of raw lumber hang a huge headless Godzilla, a gold mannequin with a horse's head, stuffed animals and other motley objects. For the community garden that houses Eddie Boros's growing sculpture, it has become a source of controversy along with the artist himself, a self-described alcoholic and trash picker who finds his materials in garbage cans and Dumpsters.

Mr. Boros, 66, began building on a 4-by-8-foot garden plot about 15 years ago, as a form of protest. He had been using the vacant land to make carvings, and when the Sixth and B Community Garden was organized, the founders wanted to relegate him to one plot. "I decided to build a little open shed," he said. "I was going up 10 feet, and something started in me. I went up 15 feet, 25 feet." Now the sculpture is about 65 feet tall and occupies six garden plots, and he plans to take it 5 feet higher.

"Eddie is building out of anger," said David Rouge, a founder of the garden. "He has never accepted the authority of the garden." Seven years ago Mr. Rouge led an unsuccessful effort to evict the sculpture. He had to settle for a ruling that forbade Mr. Boros from making it bigger. But Mr. Boros follows his muse, not the ruling.

The sculpture often elicits debate among garden members. "There are these wild raucous meetings with screaming," said Karen Schifano, founder of the garden's mediation committee.

Jimmy Dougherty, a garden member and a film maker, said that most members are defenders of the sculpture. "People are either repulsed by the sculpture, or they think it's beautiful," said Mr. Dougherty, who did a documentary about Mr. Boros that was broadcast on PBS stations this year. Because the sculpture elicits such strong reactions, he said, "it's a successful art piece."

Mr. Boros often climbs to the top of his sculpture. "He sits up there like a pirate in a crow's-nest surveying the neighborhood," Ms. Schifano said. "This is one of the last vestiges of the anarchistic, crazy Lower East Side."

(Here's another piece on Eddie from the Times.)

As Jeremiah notes, you can pay your respects: "Before it's gone, come to An Informal Celebration of the Tower of Toys, Sunday, May 11, 7pm - 9pm at the 6th Street & Avenue B Community Garden."

Anyway, another day, another piece of the neighborhood's soul is lost.

[A reader on Curbed pointed out this video from 1988:]

Email ThisBlogThis!Share to TwitterShare to FacebookShare to Pinterest
Labels: Eddie Boros, the beginning of the end, tower of toys