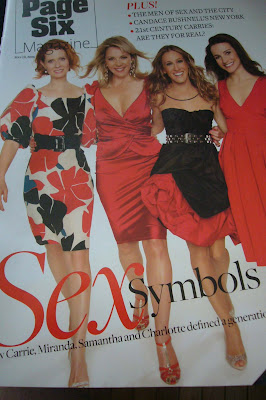 Page Six Magazine, which is FREE every Sunday in the New York Post (even though you pay $1 for the paper), devotes a good portion of the magazine to this under-the-rader independent film called Sex and the City. (Per usual, none of the content from the magazine is online.) The coverline! "Sex Symbols: How Carrie, Miranda, Samantha and Charlotte defined a generation." Yessirree!

But that's not all! We get to meet the men of Sex and the City...and "Confessions of the Real Carrie." Ohh! Candace Bushnell! She offers her choices for her faves in NYC. Like: Best place to lounge: The pool on the Soho House roof. (Of course!) The ultimate cosmo: Balthazar. (Wow! Never heard of it! I must go!) Place that makes her smile: Washington Square Park. (Ahhh!) Why? Well! Her current home, a prewar Greenwich Village apartment, is two blocks away from where she lived in the late 1970s -- though the vibe is now very different, the Post notes. (NO!) "When I first walked through Washington Square Park, there was no grass and it was filled with musicians, jugglers and punks with blue hair," Candace recalls. (Ewww! Gross!) "Now it's filled with strollers and it has the best dog run." 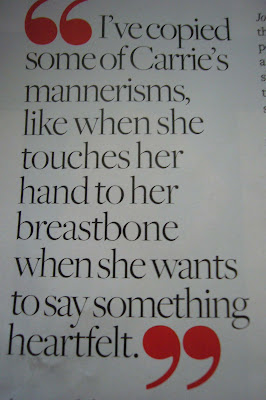 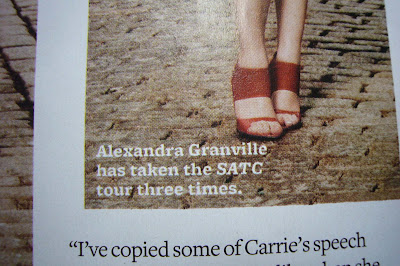 Like Erin, a 29-year-old magazine editor who moved here last year! She is "the kind of person who will eat lentils for four weeks to get a pair of Alexander McQueen gladiator boots." Live the dream, Erin! (And you're getting plenty of fiber!) 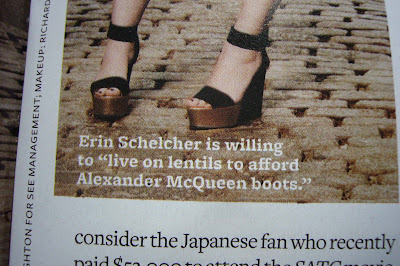 Email ThisBlogThis!Share to TwitterShare to FacebookShare to Pinterest
Labels: Page Six Magazine, Sex and the City

I used to live on Papaya dogs so that I can afford Starbucks coffee (yes I was somewhat pretentious back then) -- and I'm a man. But I wasn't influenced by this SATC yunnification of NYC, I was just a "struggling artist" when they/we were the major population of EV. Well, I had to grow-up and eventually sold my soul to the corporate world. Now that I can finally afford Slutbucks, I no longer go there-- but I still frequent Papaya dogs.

Thanks for the comment. I have a female friend who was temping some years back. She'd do things like eat peanut butter for a week to be able to afford some $$$ shoes. (She hated SATC, by the way.) Anyway, now that she makes some OK money and could likely afford those same shoes without starving herself, she shops at the Salvation Army, stoop sales, etc.

And Papaya dogs are the best...