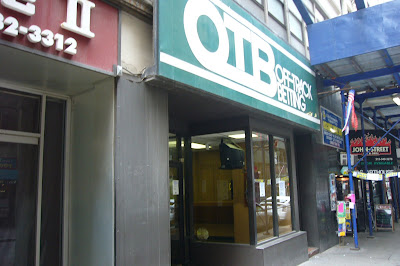 The OTB drama continues today. As the Post reports:

The city's Off-Track-Betting Corp. is advertising today for an auctioneer to liquidate its assets as talks drag on in Albany on a new revenue-sharing formula to rescue the cash-strapped bookie operation before June 15.
Among the items that would be up for grabs are leases to 62 OTB parlors, a warehouse, a repair facility, a print shop and a storage depot.
Gov. Paterson, state Senate Majority Leader Joseph Bruno and Assembly Speaker Sheldon Silver issued a joint statement on April 15 saying they're committed to saving OTB and its 1,500 jobs.
But one source said, "They're not close to consensus."
Mayor Bloomberg has threatened to shut OTB on June 15 if Albany doesn't change the formula that now forces OTB to pay out more than 100 percent of its profits.
"Everybody thinks this is going to go to the 11th hour, 59th minute," said one insider.

If you have the Post, the public notice -- "request for expression of interest" -- is on Page 55.

Scenes from a Derby day

Email ThisBlogThis!Share to TwitterShare to FacebookShare to Pinterest
Labels: OTBs