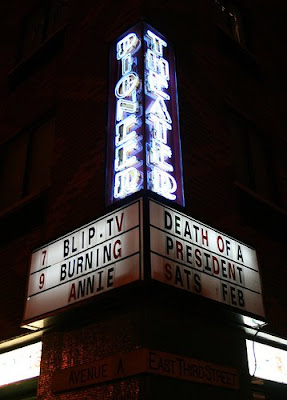 That's Ray Privett, programmer at the Two Boots Pioneer Theater. In a New York Sun feature today, Privett discusses his latest project: the Queensbridge Theater. According to the article, "As envisioned, Queensbridge will occupy an entire building in Long Island City housing a restaurant, a dance floor, and a space for concerts and performances. Mr. Privett said the venue, which is scheduled to open in the fall, will ideally remain open for 20 or 21 hours a day and cater to both Manhattanites and local residents."

More from the article:

It is yet unknown whether Mr. Privett's decision to remain involved in the local film scene will help to assuage mounting fears that Manhattan is no longer a place where independent artists can thrive. Queensbridge, for starters, has left the borough entirely.

"This is all definitely part of the general trend," Mr. Privett said. "With Queensbridge, I'm working with a lot of people from the Lower East Side who can no longer continue having things on the Lower East Side. People in the film world are going to Texas and Germany. Artists, filmmakers, movie theaters — we're getting pushed out of Manhattan, and my evolution is yet more proof of that."

[Updated] Ray Privett left a comment to this post...He had posted a few clarifications to the Sun article:

The Pioneer is still open. My departure from the Pioneer did not close the Pioneer, nor did the two things coincide. Indeed, my successors booked the three films mentioned in the first paragraph of Mr. Snyder’s article. Clearly, the Pioneer can do interesting things without me. Hopefully they continue to. Good luck to them.

Moreover, the Lower East Side’s gentrification did not cause me to leave the Pioneer. I have never claimed it did.

I left the Pioneer because professional opportunities emerged at the Queensbridge Theater - which is not a movie theater but a performing arts club, and which is now where the bulk of my efforts have shifted. Meanwhile, in film related endeavors, I felt I could be more effective as my own boss.

Nonetheless, they still sometimes put on shows in the Lower East Side and elsewhere in Manhattan. Many will continue to do so; from time to time, I know I will, too.
Posted by Grieve at 12:20 PM

Hello. I am the Privett mentioned in the message above. I thought you might want to see my short note about the Sun article, which clarifies a few points.

Thank you for your comment, Ray. I added the clarification to the original post. Meanwhile, thank you for all that you've done for the neighborhhod. My wife and I have enjoyed the programming at the Pioneer in recent years. All the best on your new endeavors.