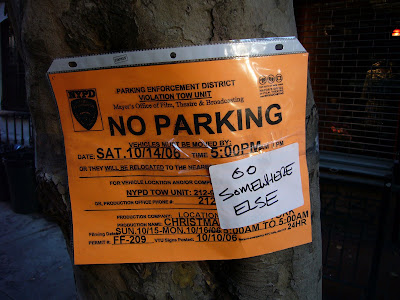 New York magazine has a listing of some of the movies that will be filming around town this summer. In the LES, two projects are listed, including the new film by Nicole Holofcener starring Catherine Keener and Oliver Pratt (an EV Grieve favorite, by the way). Among the locations: Economy Candy. And the premise: It "concerns a family that wants to expand its two-bedroom but must wait for the cranky old lady in the apartment next door to die." Hmm, based on a true story?

Meanwhile, the listing didn't mention the new Woody Allen film with Larry David that was shooting in the neighborhood in recent weeks. (I was walking on St. Mark's when they were filming at Cafe Mogador. I sure appreciated the young twentysomething PA who yelled at me to keep walking when I was, in fact, walking.)

Anyway, just a few short months before the filming starts on Night at the Museum 2!
Posted by Grieve at 11:04 AM

Email ThisBlogThis!Share to TwitterShare to FacebookShare to Pinterest
Labels: film shoots in New York, summer in the city

that PA was shitty--yelling at everyone to keep moving--

Reminds me of a line from Life In a Blender's "What Happened to Smith?":

Some t.v. cop show producer wants me to move my automobile -- well up your ass I think your cellular phone you should conceal!