"...it's not some perfunctory cinematic appendix to a popular series, but the beginning of a whole new string of films" 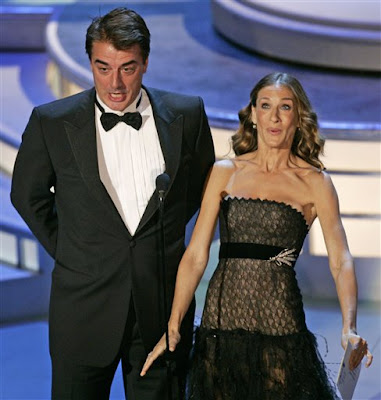 That's part of Mick LaSalle's glowing review of Sex and the City in the San Francisco Chronicle.
Hoo-boy, did he like this movie. A lot!
Yet even viewers coming in cold will appreciate "Sex and the City" as the best American movie about women so far this year, and probably the best that will be made this year. Indeed, at the rate Hollywood has been going, it may stand as the best women's movie until "Sex and the City II," if that ever comes along.
Meanwhile, Mick wraps it up:
There's something alive here. There's a feeling about this movie, that it's not some perfunctory cinematic appendix to a popular series, but the beginning of a whole new string of films. There's certainly no artistic reason "Sex and the City" can't be the women's equivalent of "Star Trek," with human emotion being the final frontier. Like outer space, that frontier is infinite.
Is it true that in space, no one can hear you scream?

Email ThisBlogThis!Share to TwitterShare to FacebookShare to Pinterest
Labels: movies that we will never see, Sex and the City