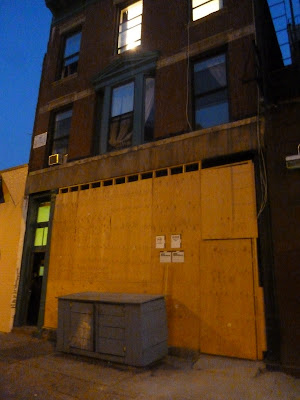 Last month, we noted that the former 40C and Batista was undergoing renovations on Avenue C between Third Street and Fourth Street... Thanks to Fork in the Road, we have a better idea of the new tenant. It's called Bedlam Bar and Lounge.

According to Chantel Martineau:

It's the latest venture by Benjamin Maisani of Eastern Bloc in collaboration with illustrator Pablo Raimondi. The décor is 19th century parlor chic, with plenty of antique-looking leather-bound books and taxidermy lining the walls. The cocktails will offer subtle twists on classics like Negronis and Side Cars, and will be complemented by a selection of craft beers. Bedlam soft opens September 16, with a grand opening on October 1. 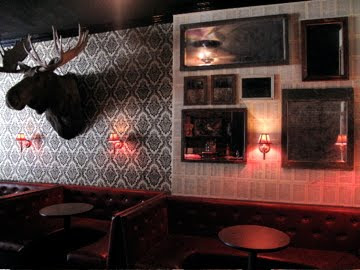 [Photo via the Voice]

The post didn't note, though, that Maisani is reportedly the boyfriend of CNN personality Anderson Cooper.

Previously on EV Grieve:
40 Avenue C getting another renovation
Posted by Grieve at 1:51 PM

Bedlam...I hope it doesn't live up to its name.

Taxidermy on the walls? That's so... challenging. What's next, "secret" bars with no signs, where you enter through a phone booth? Hasn't anyone had a new idea since 2004?

Bedlam Bar - not the first to open with a hostile name. chaos, 13th step, new place about to open on 14th street (former hammers, north side) 2-3 has hostile has name. sorry i forgot the name. more and more bars are warning us with their names. you would think the community board would pay at least a little attention to the names with all the current problems with young, stupid, loud, drunk vomiters.

guys, guys, guys. this is GOOD news! this is a GAY bar. their other bar, eastern bloc, is extremely well-run and very respectful of the neighborhood. it could have been a sports bar but it will be a GAY bar. gays, save us now! we love you! this is like right across the street from me and i am prety relieved by this.

What was the name of the bar where the girl was attacked by the moose head on the wall and sued?

I always find in establishments like this, where there is a moose head hung on the wall, the opportunity for hilarity is just too high to pass up.

Anderson Cooper and his boyfriend can fucking eat me!

Nope, sorry, Queers won't save! A place like this will turn the neighborhood into a haven for trendy Queer men. Ya know I've been an atheist for a long time, but in this day and age, in this city I actually do look to religious institutions to save! Give you an example. I use to really not like the mosk on 11th and First because they take over the whole sidewalk, I think on Fridays. Well, now I actually do like them because they
help to ward off trendies.

I remember a great gal who used to live in this storefront in 1992 who gave us a stack of photos she took of cops asleep in their cars as they surrounded Tompkins Square Park in order to enforce the city's shut-down of the park after yet another cop-induced riot there. We published those shots in the next issue of the SHADOW!!

This was waayyy before Avenues B and C started heating up. Who can afford to live in a storefront now????