A letter about Sin Sin 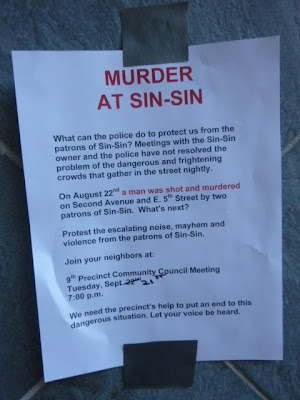 One nearby resident, Nina d'Alessandro, couldn't make it due to work commitments. This is the letter she asked to be read during the meeting:

I've lived on this block at 231 East 5th Street since 1978 and have seen the neighborhood--and the corner of 5th Street and Second Avenue -- through many changes. The situation at Sin Sin ranks with the worst I've witnessed in all these years.

I'm afraid for the young people who get into fights in the streets below my window. I'm afraid for the pedestrians who might happen by at the wrong moment when violence erupts yet again among the club's patrons. I'm afraid for the residents of this block. I've reached the end of my understanding, good will and patience because the patrons of the club are so rowdy, violent and noisy that I don't sleep until 5 or 6 in the morning over the weekend.

The noise and violence keep me up, frighten me, frustrate and anger me and affect my health, my daily life and my livelihood.
I normally use my weekends to get work done, as well as to see friends and relatives -- I discourage visitors these days because I know they won't sleep if they stay in our apartment. I can't get my work done because there is so much noise in the street at night that I have to sleep in the daytime.

The situation at Sin Sin is affecting my ability to do my job and take care of myself. While the club's owners have a right to make a living, it shouldn't be at the expense of the block's tax-paying residents.

The death of Mr. Thompson outside the club last month was tragic and predictable. I have a sickening sense that there will be more violence. Last Saturday night, September 18 -- really the morning of September 19 -- was the final straw: young people were screaming, fighting, doing drugs and drinking, dancing, and playing their parked car stereos at such high volume that my windows were rattling. Three times, they stopped when the police and/or the Sin Sin staff ushered them away from the middle of the block between Second Avenue and Bowery, and then within ten minutes they returned started up again. I really thought I would go crazy...

Something has to be done to protect the residents as well as our safety and general quality of life, or the neighborhood will change for the worse, all over again.

[Updated: Patrick Hedlund reported on the meeting for DNAinfo. The sister of Devin Thompson confronted the Sin Sin owner about the deadly shooting.
Posted by Grieve at 6:55 AM

my heart goes out to these poor people.. how did it go last night?

karma does not have a bad crowd.. what does it or even sutra have in common with sin sin? just curious...

Are you kidding? Have you ever walked by either of them? Looks like the jungle.

An excellent letter. Something needs to be done urgently.

Wow, this is really terrible. Is there no way to revoke the liquor license or shut the lounge down at an earlier hour? Do we know how many complaints have been filed against Sin Sin? How many does it take before a business get shut down? If murder isn't enough, what is?

According to Patrick Hedlund's article: "NYPD officials said their hands are tied because the club is currently fully licensed and operating legally."

A handy rocket launcher would clean up a lot of the dogshit on the street...oh wait, it's illegal. Well, so is being a public nuisance and killing people.

How 'bout throwing eggs? Or using high-powered water pistols? Still illegal? Be hard to catch you, I bet...I mean, everybody has eggs in their apartment...

Either the neighbors, or possibly the block association, could sue sin sin for the tort of nuisance (it's basically a suit saying your use of your property interferes with my use of my property, so someone who lives next door would be in the best position to do this), and ask for an injunction restraining the bar from operating. Might be expensive, but you might be able to get a lawyer who practices in that area of the law to do it cheap or pro bono.

Good news, though. Just last month Paterson passed a law stating that any nightclub in the city that has police called to it for noise complaints at least six times in a 6-month time period can have its liquor license revoked.

See about it here:
http://www.nysenate.gov/press-release/squadronschimminger-bill-crack-down-problem-nightspots-signed-governor-law

Oh I missed this meeting when I got sidetracked by Tuesday dollar tacos on St. Marks Place. I heard Squadron showed up at the meeting and talked about his new bill (the one quoted in the comment above).

I have been saying to anybody who will listen that Sin Sin is a perfect test case for this new law, and I would have made that point if I had gone to the meeting, but for those darn delicious tacos.

The trick is that the 9th prct has to make a commitment to use this law to shut down a bar because it requires 6 police write ups in a 6 month period, which means not only do they have to show up when they get a call, they have to write a report each time.

I'm still waiting for the police report from when a tree fell on my car two years ago. My faith in their ability on the follow-through is low to none. But if we keep the pressure on then maybe they will have to dust off the typewriter and try it.

Correction, the police have to make 6 reports in 2 months (not 6 months), which is even more difficult.