Memorial in place for murder victim outside Sin Sin

Earlier this week, Patrick Hedlund at DNAinfo reported that the Sin Sin management refused to allow the sister of the man slain outside the club to create a temporary memorial in his honor.

However, perhaps Sin Sin had second thoughts about the tribute to 37-year-old Devin Thompson, who was shot twice on Second Avenue at East Fifth Street on Aug. 22.... Last night, a memorial was in place on East Fifth Street.... 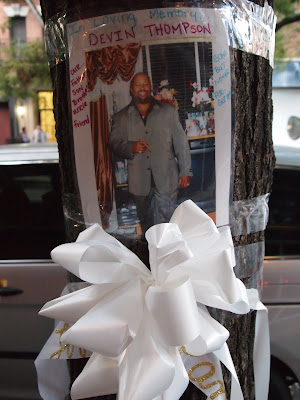 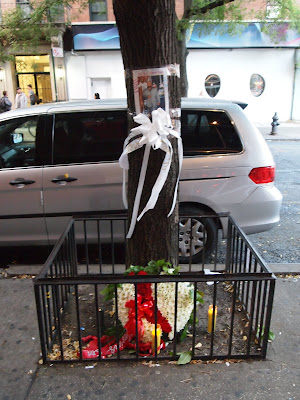 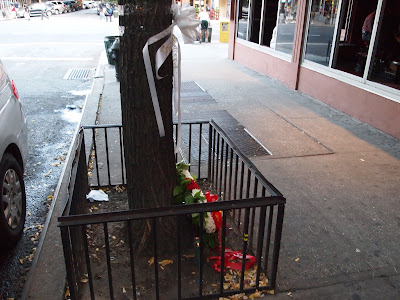 Patrick Hedlund has an update here.

Why the president of the East Fifth Street Block Association carries a baseball bat
Posted by Grieve at 7:05 AM

I was glad to see this memorial had gone up this morning. Now I'm sad to see Thompson's face and think that his sister had to go through this. I would not have thought of Sin Sin at all if its owner had not denied her this display of grief. His thoughtlessness and self-centeredness just astounds me.

I took these photos last evening... I walked by again this morning to see if the memorial was still there. It was. To be honest, I expected that someone would have it removed.