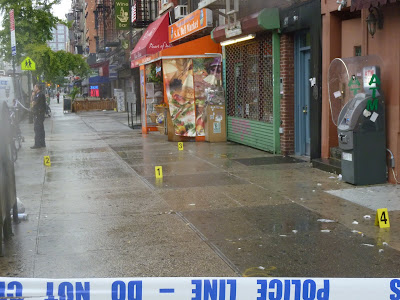 According to a published report, two men are now wanted in the fatal shooting that occurred on Second Avenue and Fifth Street outside Sin Sin on Aug. 22.

As Patrick Hedlund reported at DNAinfo:

The man remained in critical condition at Bellevue hospital until dying from his wounds on Monday, NYPD sources said.

The incident occurred near the popular nightclub Sin Sin/Leopard Lounge, a location that police have been called to three times over the past year following reports of drug use and prostitution, sources said.

The victim and two suspects had been inside the club before the shooting occurred, but it is unknown whether the men knew each another prior to the incident, police added.

The NYPD also released video footage of the two suspects:

Thanks for the update. This is terrible news.

The blog "Eater" has a feature called "Deathwatch" where they call out restaurants that they think will close in a few months. They really should start doing this with bars and clubs.

Devin Thompson was, is and will always be safe in our hearts Forever. PURE ENERGY!