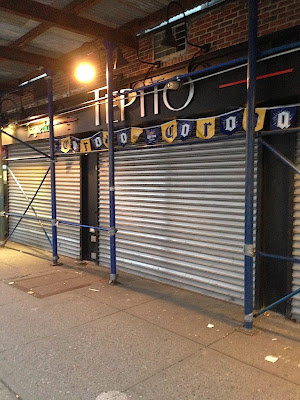 Tepito opened here on First Avenue near East 14th Street back in December 2011... however, we haven't seen it open recently. (A Yelp reviewer said that he/she tried to order online from the Mexican restaurant last week, and found it closed.)

The chef here is Adrian Ramirez, who previously worked at Le Cirque and Dos Caminos. No note on the door. No outgoing phone message. No mention of a closure of the restaurant's website.

We first reported back in April 2010 that the former David's Bagels would become a Mexican restaurant... 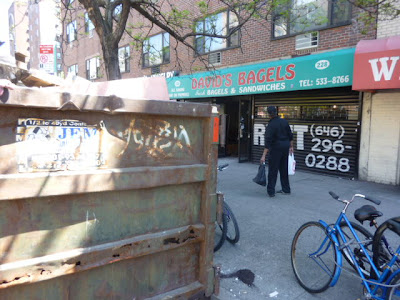 By the way, anyone ever try Tepito? Seems like a tough location for a nice sit-down restaurant... And how long has that sidewalk shed been up here...?
Posted by Grieve at 6:01 AM

Email ThisBlogThis!Share to TwitterShare to FacebookShare to Pinterest
Labels: restaurants that may possibly be closed now, Tepito

Tepito went out of business. I walked by one evening a week or two ago, and the chalkboard out front read, "Our last night." It's so hectic and dirty at that intersection that I don't even like to walk through there let alone sit down for a dinner in the middle of it all!

The times I've walked past there it always seems busy. Just looked like a bad spot for that type of activity. Well, it looks like the transplanted yuppie lifestyle can't survive in some spots in the EV no matter how determined they are to bulldoze the 'hood.

they used to play soccer so I became friendly with some of the bartenders over tequila--the owners apparently were fighting and have decided to reopen the space as a new restaurant, maybe greek? regardless, the decision to close was made with very little notice and no one really knew what exactly was happening.

Oh great! Now ANOTHER 99 cent pizza place can open at that intersection!

Yeah that shed has been up for a LONG time - I would see, in the summer, people sitting in the open windows but under the shed, which sort of negated the point...

Bring back David's Bagels, then.

I ate there once. The food was average and the prices high.