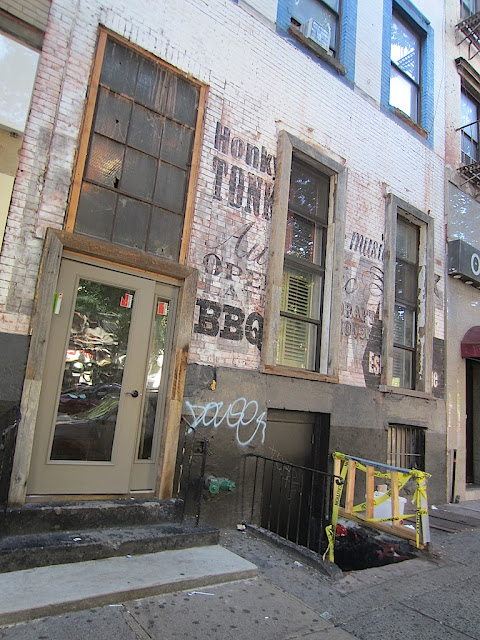 As we first reported last November, celebrity BBQ chef Myron Mixon was going to open a restaurant/saloon in the former Lucky Cheng's space on First Avenue. (Read that post here.)

After months of renovations, Mixon and company held a preview at the space on May 21... which prompted a four-star Yelp review. Everything seemed to be ready to go. On May 29, the Pride and Joy NYC Facebook page announced that they'd be "opening soon."

In recent weeks, someone removed the Facebook page. The Pride and Joy BBQ website is now "under construction." And the space has sat mostly dormant in recent months... the East Second Street side has all the hallmarks of a stalled business — a broken window and door... and a Wacky Wok menu... 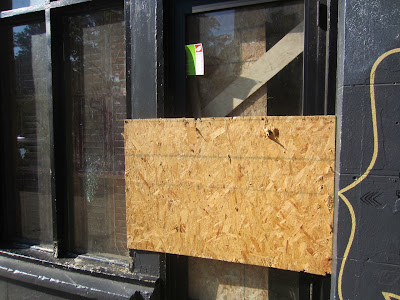 Turns out that there was a good reason for the inactivity: Mixon has reportedly parted ways with the restaurant that bears his name. (A location opened in North Miami Beach last November.)

The Daily Meal has the scoop:

According to the lawsuit (Myron Mixon and Jack’s Old South LLC against Pride & Joy LLC and Pablo Cardenas), which was filed on August 8th, Mixon is accusing his partners, Mike Saladino, Chris Mayer, Paul Thielecke, Jose Santa, and Pablo Cardenas, of trademark infringement, breach of contract, and misappropriation of name and likeness; it also alleges that they also owe Mixon a large sum of money in licensing fees for his name.

The Daily Meal notes that Pride and Joy's fate here has now been thrown into question.

While the Miami location is going strong, the New York outpost has yet to open. If it does end up opening, however, Mixon’s name and recipes will be nowhere near it.

And what will become of the giant rotisserie?

Fire reported at incoming Pride and Joy BBQ on East Second Street
Posted by Grieve at 6:00 AM

My favorite part is this quote from Mixon. "unfortunately, my partners just weren't committed to quality food, superior service and all of the other things that make a restaurant great... I would just walk away (get my name far from what they're doing) but frankly, beyond serving bad barbecue, they've also knowingly cheated me",... Yikes!...

Considering that in an earlier interview when he was still hyping this place he said the Miami branch was a trial run for NYC, because "in NY, you don't get a second chance in the food business",...I wonder if he thinks his first chance in NYC has been used up yet?

That signage on the wall looks like it's from Wild Wild West casino in AC. The East Village is the new Atlantic City.

This place looks like it will suck worse than the trannies I used to see pulling up their skirts to take a leak in the slimy old men's room at unLucky Cheng's.

Talk about unauthentic theme-park decor, that looks like an Old West themed Ralph Lauren pop-up boutique inside a WalMart.

And how do you get four stars on Yelp before the public even has a chance to savor the $59 kosher rib platter with the duck fat encrusted pizza sticks?

That Honky Tonk stencil is an insult to all self-respecting East Village honkies, who would much refer a flaky glazed artisanal gluten-free bisquit to whatever slow cooked to perfection crap this place is serving out of the garbage disposal.

Please tell them to go back to Foxwoods or whatever casino they came from, at least when it was a Lucky Chengs the customers knew why their butts were sore the next morning.

This whole thing doesn't pass the smell test....Mixon touting Miami as doing well, food wise, and him now saying he is being cheated( there's another lawsuit, right there)... 3 partners being pretty much silent, no word publicly from Michael Psaltis, CEA, the group managing the place.. stay tuned folks, I'm sure there is more to come...I'll put money on the 3 partners...Nothing like partners in a restaurant duking it out on who is being a bigger asshole..

The Miami branch of this monstrous nightmare is in the heart of Miami in the gallery and design district, not North Miami Beach

they are better off without him. the food in wynwood is no big deal and if they serve that here fette sau and mighty quinns will have them for lunch.

Bring back the old "Club Baths" along with their famous policy of offeriing discount to young NYU students with proof ID.

I'm so over this type of signage.