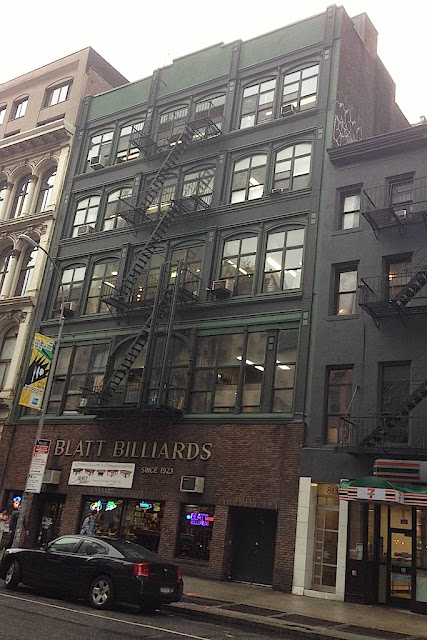 Blatt Billiards, a pool table manufacturer, is leaving its longtime home at 809 Broadway near East 12th Street. As The Real Deal first reported yesterday, the building is changing hands for $24 million. The deal includes an additional 7,045 square feet of air rights.

Blatt was a longtime tenant here before buying the building in 1972. The manufacturing portion of the building will move to New Jersey while Blatt looks for a showroom in Hell's Kitchen, per The Real Deal.

The closing is expecting to happen early next year. The new owner is only ID'd as 809 Broadway Associates.

As The Real Deal noted, the building is "one of the last relics of the area’s manufacturing past."

There's now a 7-Eleven conveniently located next door.
Posted by Grieve at 5:28 AM

Well it's obvious -- 7-Eleven caused them to leave!

...when Cedar Tavern can turn into a waxing joint, the possibilities for this space are limited.

Too bad. This is where I go for all my billiards needs.

I'm going to make a crazy, left-field prediction here - it will be condos that nobody reading here will be able to afford.

And the ground floor retail will be designed for NYU students to sit at every table all day on their laptops / and/or purchase stuff with their parents' credit cards.

Fuck, I need to move.

I was always comforted by the sight of this place because it lulled me into the belief that there is still a place in this town for anything that isn't a bank/useless chain store.

Some years ago I was possessed by the slightly crazy idea of putting a real, 8 foot pool table into what has always been my bedroom, turning it into a poolroom do to speak, and sleeping in the living room on my comfortable sofa which turns into a very comfy bed. Happily I came to my senses before I pulled the trigger, but in preparation I visited Blatt a couple times to think about choosing a table, deal with some stick issues because of some size limitations of the room, etc. The guys in there could not have been more helpful, courteous, just real old school.
Hey maybe they will have a going-out-of-business sale, I could get a great deal on a table, maybe it was not all that crazy, hmmmm........

For years I've wondered how this place could've stayed in biz / afforded the rent. Sorry to see them go.

Blatt owns the building. TheRealDeal reported they were selling it for $24 million. They are cashing out... And they are having a moving sale. I'll be sorry to see them go. This block is going to the chains, both national (7-11) and local (Pain Quotidien, Brooklyn Industries). I am not optimistic about the new neighbor.