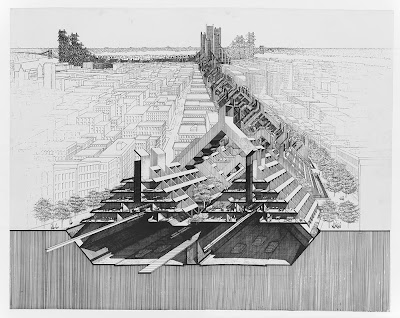 A reader shares a link to a Wired article titled "Maps of Unrealized City Plans Reveal What Might Have Been."

The piece looks at city plans that (thankfully, in some cases) never came to be... all via Andrew Lynch's Tumblr called Hyperreal Cartography & The Unrealized City ... it's loaded with city maps "collected from libraries, municipal archives, and dark corners of the Internet."

Of some local interest... the above plans from the 1950s-1960s ... it was an idea hatched after Robert Moses didn't get his Lower Manhattan Expressway off the ground...

"[T]he Ford Foundation asked architect Paul Rudolph to envision an urban expressway that was better integrated into the city. Rudolph drew a futuristic city with soaring, Space Invader-esque residential towers around the Manhattan and Williamsburg Bridges. The highway would wind beneath a linear city, and modular housing units would be connected by a pod-like monorail system."

Sort of like the renderings for the Domino Sugar Factory. 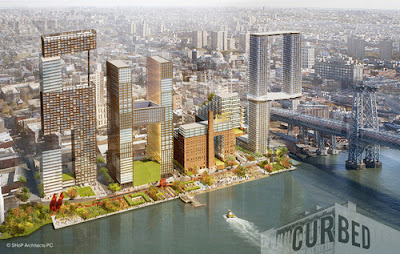 Email ThisBlogThis!Share to TwitterShare to FacebookShare to Pinterest
Labels: Back to the Future, the future

Too bad. Those renderings look a hell of a lot more abstract and thoughtful (even vaguely Blade Runner-ish) than the generic boxy crap that will be replacing Domino's.

Whoa, those are gorgeous. Can we build those and Gaudi's art deco rocketship skyscraper, too?

What a cool rendering. The bottom one is so heinous, I can't bear to look at it too long. Maybe another hurricane will wipe them out before anyone moves in.

I prefer the old Havemeyer sugar factory, but I like the bottom pic. Better than the nondescript towers they built in Williamsburg on the waterfront.

Is it a joke that the bottom one seems to spell S-H-O-P?