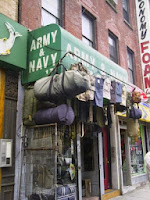 Some possible good news for fans of Army & Navy Bags, the 40-year-old shop at 177 E. Houston St. between Orchard and Allen.

DNAinfo's Serena Solomon reported yesterday that the shop will likely be able to remain open after its landlord Serge Hoyda agreed to a lower rent increase than he had initially offered.

Last month, Hoyda said he would nearly triple the $3,800-per-month rent for the 300-square-foot space, as BoweryBoogie first reported.

The new leases isn't a done deal. The landlord is still drawing up the papers. There was also a demand to "improve the front of the store to look more like other tenants along the block, including the pricey new restaurant Preserve 24, Russ & Daughters and American Apparel," Solomon wrote at DNA.

Email ThisBlogThis!Share to TwitterShare to FacebookShare to Pinterest
Labels: Army and Navy Bags

Yeah, I don't understand the need to spruce up the storefront. One of the main draws of this wonderful place is the way it looks. Stop playing interior design landlord and let it be, please.

Anonymous 10:28,
That would be exterior design landlord, no?
They could improve the front of the store just by taking their merchandise inside and then cleaning the windows. They wouldn't even have to spend any money.

The look of the store is so East Village/Lower East Side in many respects and to "SANITIZE" it is to hammer yet one more nail in the coffin of individualism.

Anonymous 12:38,
I don't miss the point at all. Look at Russ & Daughters, right next door. Their windows are clean and there is nothing hanging in front of them. Are they less LES for that? It's a feng shui thing, having nothing at all to do with individualism.

Have any of you been in that store? There is NO ROOM to put that merchandise. It is literally floor to ceiling bags with very little room for walking and they basically have no storage.

And I think it doesn't look bad as is. Its an Army/Navy surplus bag store. How else do you want it to look?

On another note, I've bought a couple of things from them over the years. The owner is super nice and really helpful and I could see he has regular customers that he maintains a good relationship with.

Anonymous 12:33,
Do they leave their merchandise outside at night? I suspect they take it inside, therefore they have room for it inside. Even if there was absolutely no room inside, once they sold a dozen bags or so, they'd have room for the ones outside, so it's not a real problem.
Bringing the stuff inside and cleaning the windows costs no money and will probably satisfy the landlord, and might result in more customers. What is there to oppose?

What is there to oppose? How about who cares if there are bags outside of a bag store? Or leaving a business to do its own thing and not being a control freak.