[Updated] Memorials for LES Jewels in the East Village 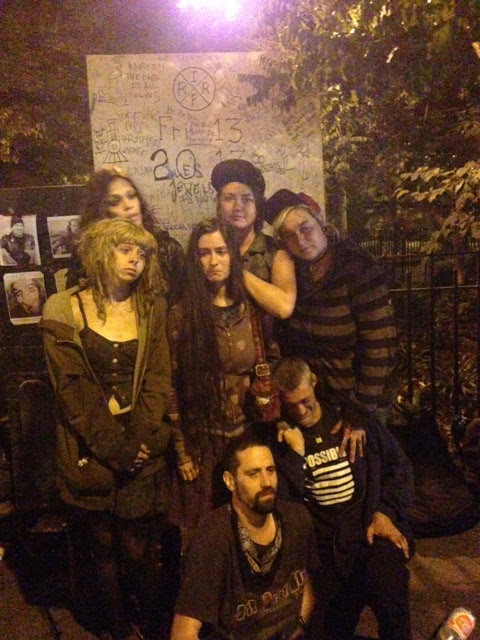 There are at least four memorials now in the neighborhood for Joel Pakela, aka LES Jewels, who died this morning from what some people have said was a drug overdose. (No official word just yet.) There is a memorial now on Avenue A at East Ninth Street... 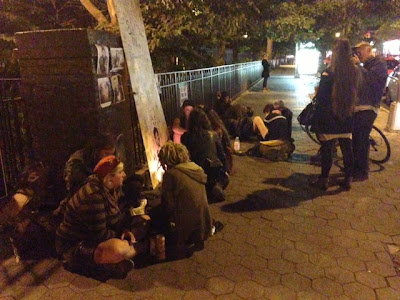 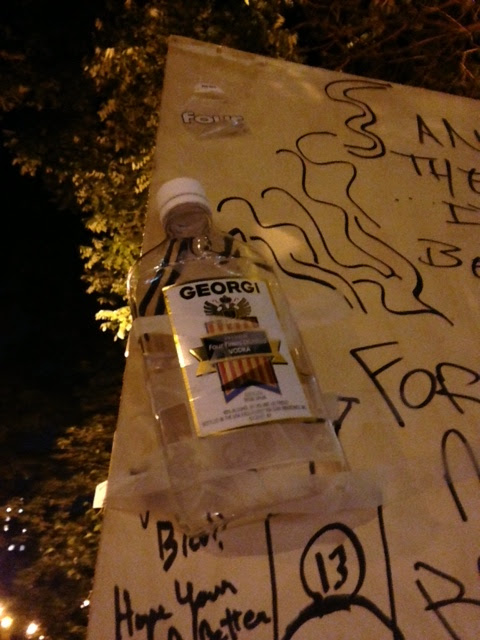 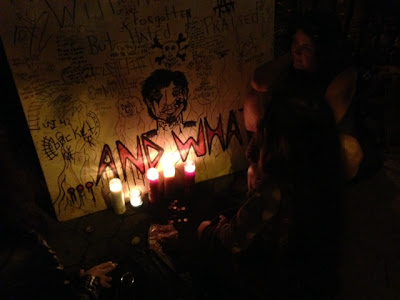 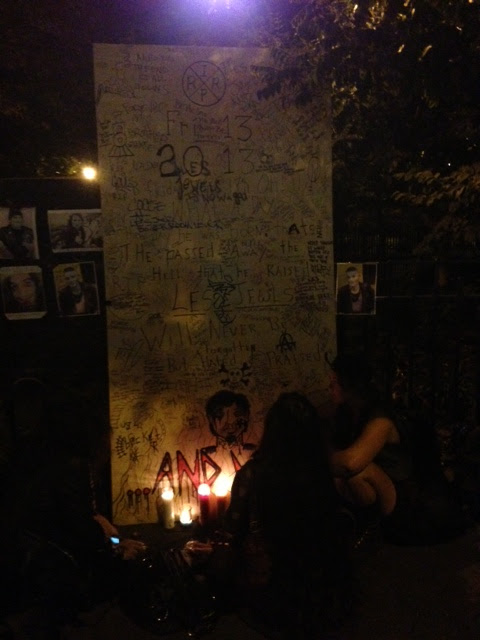 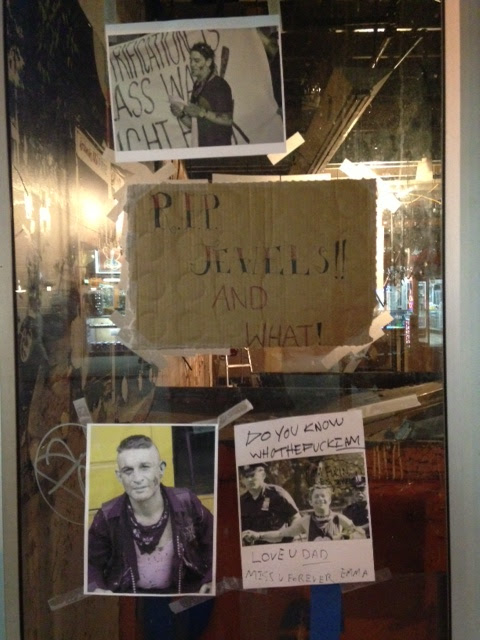 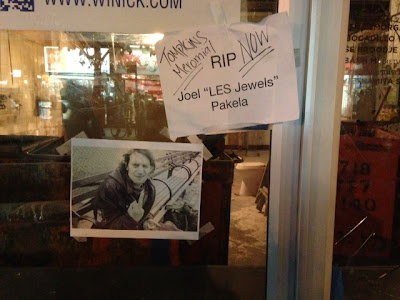 ... and outside the Museum of Reclaimed Urban Space (MoRUS) on Avenue C... 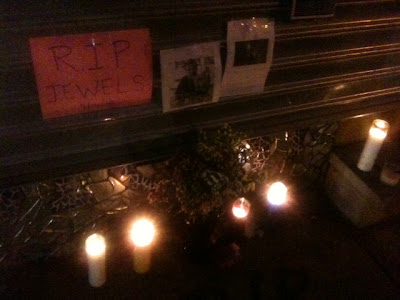 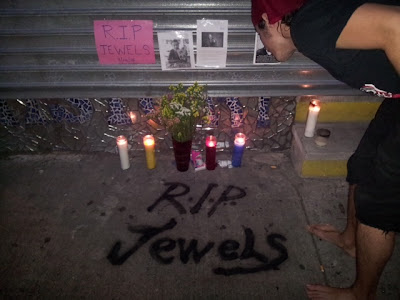 There are also several candles lit in his honor outside Ray's on Avenue A.

Thanks to our dear friends at MoRUS for the above photos.

Steven Hirsch shared these photos from last night on Avenue A and East Ninth Street... 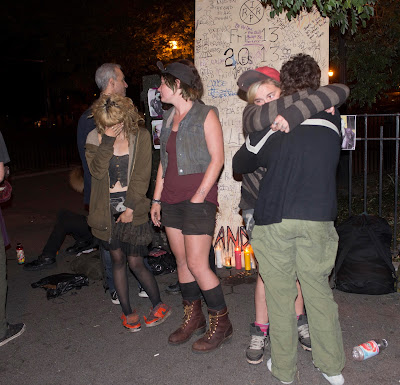 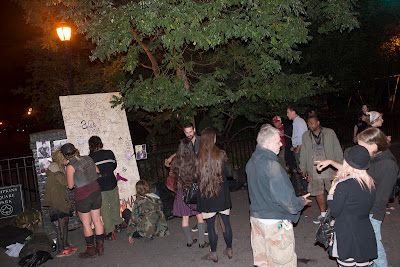 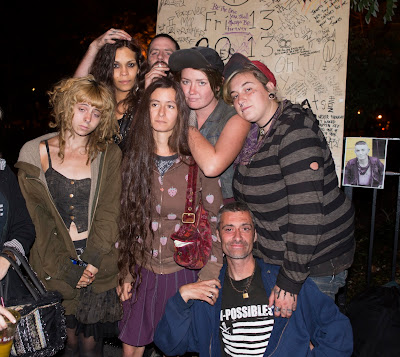 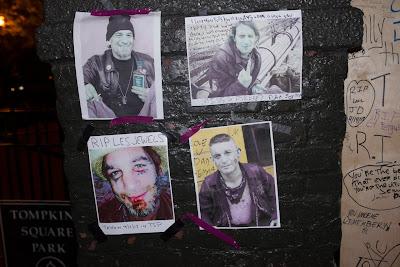 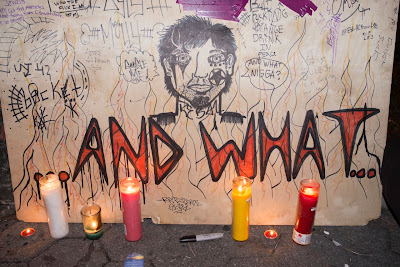 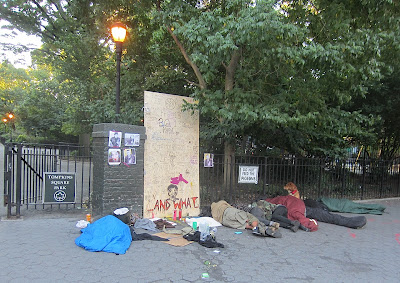 Decent enough guy when sober, but a madman and an asshole when drunk.

I have a lot of mixed feelings about him -- I didn't hate him, but I didn't really like him much either. Still, I must admit that I did enjoy his shenanigans that creeped out yuppie scum in our neighborhood.

Despite a LOT of the fucked up things he did (and there were a LOT), he really wasn't a bad person. I am sorry that he's no longer with us.

It's such a fucking shame that he wasted his life and threw away the precious gift he was given for just a fleeting moment.....

In spite of everyone's mixed feelings, and yes it is sad he OD'd which is not at all uncommon for crusties to do in TSP, he was a real menace to hundreds of people over the years, including women and children who could not defend themselves, not to mention the men and women he beat up on a refusal basis. An angry drunk and druggie has died, while thats sad the Avenue and Park will now be much safer, cleaner and quieter because of it, so lets just leave it at that. Now we can all rest in peace....

@chris - the struggle is always with ourselves - brother Jewels being no exception to that. He lived how he was meant to live (like all of us) - his life wasn't "wasted". He was a true human - flawed like all of us, a mixed bag. Not a few of us become assholes under influences of alcohol and such... His antics and shenanigans - let's hope he stays in the neighborhood with them and never leaves us in that way. We can only hope ;)

I knew jewels long before he earned that name.....grew up on the same street ...has always been a wildman...n loved him all the same...truly a unique...n talented person...hope you're hanging w GG ...will Miss u homie..

yes, RIP --no doubt he was a tormented soul, etc. but with all due respect, I think some of you need some perspective and a reality check. EV "flavor"? come on already. if it was YOUR face he hit in a drug and alcohol-fueled rage, i don't think you'd be quite so misty-eyed.

The crusties have lost their leader.

Is that Amy in the group photos in front of the TSP gate? The girl with the super-long brown hair? Does anyone know how she is doing? I learned about her and Jewels on NMNL and really hoped those crazy kids would make it. I'm naive-dumb-hopeful like that.

Yes that is Amy in the middle. Come to the HOWL memorial for him that I am organizing at TSP on Friday at 8pm and she will probably be there.

John Penley, thank you, I didn't know Amy or Jewels ... I just always thought she seemed very kind-hearted and sweet, and she and Jewels were very sweet together. I imagine she is quite brokenhearted right now, and when I read the news about Jewels I immediately wondered how she was doing. Funny that photos and stories from EVG, Bob, yourself can make us care so much about our neighbors we don't know personally.

From another Amy, xo to all his loved ones and RIP Jewels

Sorry about your friend....I've known a few like him...you mostly just have to watch the play and be sad when it's over.

RIP Jewels. The Avenue is not the same without you and the world famous Pee Phone anticks. You always gave me a sweet hello.
Melanie
East Village Corner