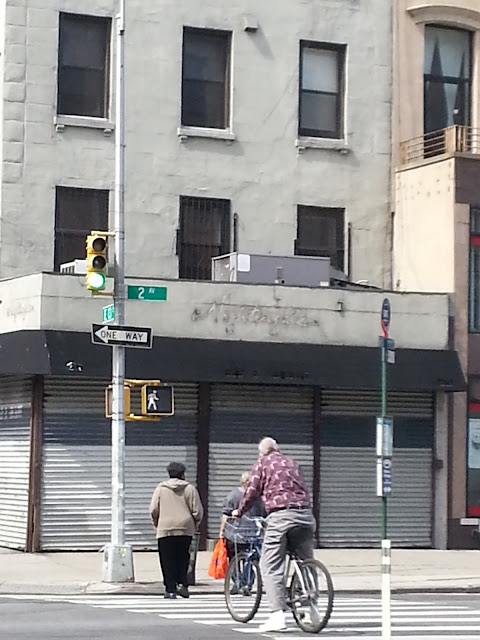 Our friend DJ Xerox passes along this photo ... noting that Nightingale Lounge on Second Avenue at East 13th Street has apparently closed... the bar had been known as a launching pad for bands such as Blues Traveler, Spin Doctors and God Street Wine. (To be honest, I've walked by the place a gazillion times, or so, through the years, but never stepped foot inside.) 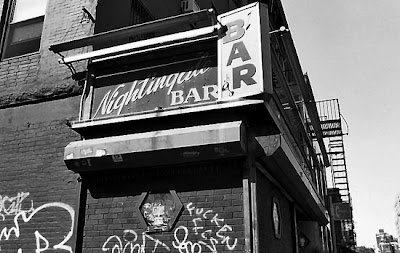 [Photo from 1998 by Grégoire Alessandrini]

The bar, though, had been sold... and, according to documents filed ahead of May's CB3/SLA meeting, a new team led by Ed Sherman was taking over the space with a proposed name of Goats. Sherman had been involved with the Looking Glass bar on Third Avenue and Revival on East 15th Street, per the CB3 paperwork. (You can find the PDF here.)

The full CB3 board gave its blessing on the new license during the meeting in May, noting:

Goats (Goat Brothers Inc), 213 2nd Ave at 13th St (op)
VOTE: Understanding that this is a sale of assets of a preexisting tavern, Community Board 3 moves to deny the application for a full on-premise liquor license for Atlas Hugged Inc., with a proposed business name of Goats, for the premise located at 213 Second Avenue, at 13th Street, unless the applicant agrees before the SLA to make as conditions of its license the following signed notarized stipulation that
1) it will operate as a tavern with food service,
2) it will have a closed fixed façade with no open doors or windows,
3) it will play recorded music, and not have live music, DJs, promoted events, scheduled performances or any
event at which a cover fee will be charged,
4) it will not have "happy hours," and
5) it will not host pub crawls or party buses.

it was a slum bar for us in the late 80's...didn't change much over the years...not too worried, plenty of other places to buy legal drugs.

the corner used to house a luncheonette that made their own ice cream and real whipped cream.
they sold boxes of candies and stuffed animals.
it was a great place.

I'll be first in line.

Goats...does this mean there will be food served in a hoof?

Awww, was fun when it was a dive bar. "Goats"? Can we coin a term for this neo-agrarian aesthetic that seems to be taking over with this influx of people from the farmlands?

No live music? No happy hour?
What's the point?

Who was that crazy surf-rock guy who used to play there in the 90s? Simon and the Bar Sinisters I think? Wonder whatever happened to him. Those shows were fun. I thought it was a great place to go hear music until they redid it and tried to fancify it--sometime in the early aughts?

My friend's pink band, 2 Minutes Hate, used to play there. He would strip down to his tighty whities, roll in broken glass, and run into the street screaming into his mic. I know, you're thinking it sounds a lot like GG Allin, well you're right.