Report: Partygoer may have caused stairwell to collapse at 159 Second Ave. 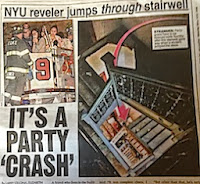 As for that stairwell collapse at 159 Second Ave. ... the Post reports today that a "drunken NYU teaching assistant crashed through three marble landings while trying to jump the stairs," according to unnamed authorities.

“The guy jumped. He broke through a couple of landings,” said a source with the city’s Office of Emergency Management, which had video of the 1:30 a.m. stunt gone awry.

A friend who lives in the building said Niu, a student at NYU’s prestigious Stern School of Business, “was barely moving” after his fall.

“[He] was definitely a little intoxicated and probably stumbled down,” the friend said.

Friends of the NYU TA said that he weighs roughly 150 pounds.

“I have no idea what kind of weight [the staircase is] supposed to sustain,” an OEM source said. “But, obviously, it was not being used normally. It was jumped on by a grown man from 10 to 12 feet in the air.”

Meanwhile, the missing sections of the stairwell stranded about 40 students on the roof. The student reportedly suffered broken ribs and a fractured ankle. Authorities are continuing to investigate the cause of the collapse, per the Post.
Posted by Grieve at 5:18 AM

I love the part of the story where one of the NYU-ers yelled for everyone to shut up because somebody 'may have just died'. Glad to see that, even though they have no respect for anyone else in the neighborhood, at least there's something that can get the woo train to apply the temporary brakes.

JAZ, would have been astonishing if the kid told the others to shut up because "the other residents are trying to enjoy a quiet evening at home". Heh heh heh. Yeah, right!!!

I cannot believe what morons these students are. I wish NYU was forced to provide housing for them so that we weren't all forced to live with them.

There should be an NYU student resides in EV fee, collect it and use it for over all funding of community enhancements like bird bath in Tompkins Park...they can afford high tuition a small nominal fee equal to a lab charge is fair for the abundance of youthful shenanigans the rest of us are forced to tolerate

Niu from NYU? Seriously though, looking at the photo he really did crash through the landings, thank goodness he didn't land on anyone.

I noticed a lot of the "witnesses" were underage- did the NYPD bother to cite all these underage drunks? if they did maybe these shenanigans would be more on the DL- right now there are zero consequences for their childish antics.

I'm having trouble understanding exactly what happened but this is so scary. It could happen to any of us with much less impact. These buildings are over 100 years old with little renovation or oversight. They stripped the wall of our roof of its tar this week and we pulled out newspaper from the bricks from June 1969.

Perhaps tenants shouldn't turn against each other over identity politics: clearly the landlord was negligent and/or the stairs were not up to code. If a 150 lb guy jumping on the stairs crashed through multiple landings, what do you think would happen if a 300 lb man tripped on a step and fell onto the landing? Hell, a few more years of decay and a frail old lady could burst through the floor. Don't forget the reporting is from the Post. People whose partying adversely affects other tenants/neighbors are narcissistic assholes, and should be chastised, but landlords in the ev are overwhelmingly absentee scumlords.

Well, Jill, the drunken college kid was literally jumping from landing to landing, the OEM said he leapt from 10-12 feet up and you can imagine the impact of a grown ass child jumping with all their weight onto a stone landing.
These are strong old buildings, I'd say they are much stronger than most new buildings, they just need tlc and basic maintenance so 1969 newspapers is nothing to worry about.

And She Should Never Have Been Running the Microwave At the Same Time As the Hair Drier. She Should Have Known the Building Would Burn Down. said...

@Jill, yes, the part about the stairway "not being used normally" is total bull.

What would have happened in case of fire when FDNY would have gone racing up the stairs loaded with heavy equipment?

What would have happened if a pair of EMS workers had been carrying down a stretcher with a sick person?

I think it's time we seperate out our unhappiness with "NYU woo" from what appears to be criminal failure to properly maintain the building staircase.

Of course I'm sure that the owner of the building would beg to disagree.

I wouldn't be surprised to hear the staircase was lined with revelers. And even if it was in good shape, if you hit something just right you can break on through to the other side as they say.

According to several news outlets, the Buildings Dept. personnel were there on Sunday a.m. and "okayed" the staircase and building/foundation, etc.

And if you have a question about your building, you ought to call HPD... they will send someone to check it out.

22 years in a 1901 New Law tenement...and plenty of calls later... the city will check, or issue a stop work order if need be... just keep calling. And organize the tenants in your buildings...

A 150 pound man jumping through the air 12 feet down onto a landing has a greater impact than a firefighter with gear.

I agree with the people who are focusing on the stairs falling. How is that something possible from a 150lb guy jumping? That's simply not good.

Just 2 weekends ago, I was walking on 7th between 1st and 2nd when I saw a piece of building fall square on a guy's head. He was 1 foot in front of me when it happened. Absolute epitome of wrong place wrong time; mistiming a step so that because he stepped right there at that second while walking a piece of concrete hits him square in the head.

I was surprised I saw nothing on it here, but it was extremely disturbing. Building's shouldn't be dropping concrete on people and stairs shouldn't collapse because a 150lb man jumps on them.

Just as a side note, the ambulances and fire department came to the incident I described, so the city is aware. And maybe that can be tossed up to awful luck, not negligence. I don't know. But the fact is, instead of infighting about how 20 something year olds annoy you, maybe you should focus on how people charging us 20 something year olds 4 figures for rent can't properly maintain a building.

And disclosure: I am an NYU alumni. I don't disagree with your opinions of how annoying some people can be; there is a lot of entitlement because the school attracts people of a selfish demeanor (and not just NYU but a lot of colleges in general will have people who feel like they are awesome because they were just high school seniors and that makes people pretty intolerable). I find the attitude of thinking the world is your cute little stage very annoying, NYU or not. But not everyone having fun and partying at night is inherently a bad person. Selfish noise violation is one thing but don't hate on someone for drinking or having fun.

And the NYPD would have been within their right to cite underage drinkers, but really? You think the law should come down on someone who is the age of majority but not the drinking age? I imagine a lot of you are somewhat anti-establishment and also come from an era when the drinking age wasn't arbitrarily 3 years after you could join the military and vote. Let's not focus on crappy drug laws that a lot of us can agree on cause more harm than good. Prohibition and criminalization of drug use has done nothing but hurt people and charging non-minors for drinking is an extension of this. The effects aren't as far reaching and toxic as throwing someone in jail, obviously, but it's all part of the same dangerous beast of holding people legally responsible for what they choose to do to themselves.

This guy probably shouldn't have been jumping around an apartment building at night but he also didn't deserve to fall through three sets of floors. And the tenets of the building have the right to not live a building where something like that is possible, especially given how much money the place probably costs if it is like every other building in this city.

Focus on slumlords here and by all means get pissed off at selfish entitled people (I sure as hell do on a regular basis) but try to see that not everyone who goes/went to NYU wants to trash the city or sees the city as a selfish extension of them and nothing more.