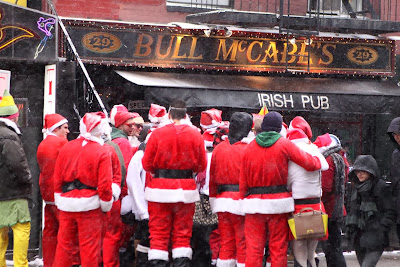 [Saturday afternoon, of course, via EVG reader AS]

We'd like to forget all about SantaCon 2013. (Oh, but God, we can't — we see red Santa suits and hear Wooooooooo! every time we blink!)

However, there are several recappy type articles that, uh, recap what went on... like this one from The Wall Street Journal that provides some arrest numbers from the weekend.

Amazingly enough, per the article:

[T]he New York Police Department made no arrests, issued eight summonses for open alcohol containers and two summonses for disorderly conduct related to the event. Last year, police made one disorderly-conduct arrest, issued 73 open-container summonses and issued one other summons for public urination. 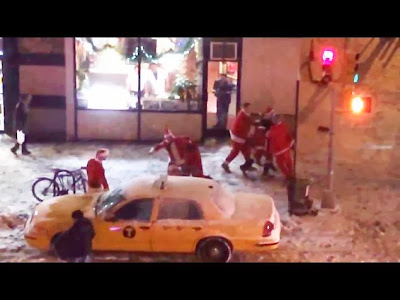 How about the subways and buses and stuff?

So you see, it really was nothing. You SantaCon haters must just not like to have fun!

[Ducking and running from computer]

Oh, and as for the charitable portion of the event... because SantaCon stands for charity!

SantaCon participants donate money to charity, but organizers said they won't know how much they raised until later this week.

I was the girl with the three foot long santa hat who yelled "Hey, you wanna make out?" and you were Eric and said, "Me? Sure!"

Thanks for going along with it! It might ruin the perfect moment of spontaneity but I wouldn't hate getting to know you better because you were sweet and very cute.

If you remember this, I don't know, reply with my name or with what my friends were eating or something to prove you're the guy. Merry Santa Con!!

So, as SantaCon proves, "Hey, you wanna make out?" is a viable pickup line. Try it at your office holiday party. Or, better, standing in line at the post office! Anywhere!

BONUS QUESTION FOR COMMENTS:
Guess what her friends were eating! A chair from the Village Pourhouse? The soul of the East Village? So many choices!

UPDATED:
Here's the alleged tug-of-love video in the Duane Reade entrance on Third Avenue and East 14th Street that people are referring to in the comments.
Posted by Grieve at 11:16 AM

Email ThisBlogThis!Share to TwitterShare to FacebookShare to Pinterest
Labels: SantaCon 2013

I was looking out my window on Sat night and saw something red in the road which appeared to be a red box or paper which was moving in the snow. A few seconds later I realized it was a Stantaconer who was lying there and was trying to stand up. He got separated from the pack. He finally managed to stand up before any cars passed by and staggered in drunken daze back onto the sidewalk. As obnoxious as this whole thing is I didn't want anyone to get killed especially dress up like an asshole.

Given the low visibility of the weather and the high level of inebriation, I was convinced someone was going to die. Coming home from work, I had a hard enough time crossing Astor Place at 8:00 Saturday night.

With all these statistics there's one they missed: counting how many of these people actually LIVE down here. I'll bet it was 1% or less.

Funny who is arrested for public intoxication and who isn't.

Too much fun indoors and no costume required to decorate the tree, but finally made it out just after midnight. Didn't get 3 blocks before passing a straggling Santa, oddly observing the Prince St. architecture bet' Mott and Elizabeth. Not an empty block, but that didn't stop him from whipping it out to pee on a store window. I thought, Dude, you're living the cliche.

Shrimp poppers, pizza shooters, x-treme fajitas, something like that probably.

I am also surprised that there were no casualties. I mean its not that unusual for some drunk kid to wander onto the subway tracks or something, on an ordinary weekend, and last saturday it was fairly treacherous out there with all the cold and the snow.

There were no cops to be seen when one of them intentionally body-slammed me when I was transferring between the L & A trains, nor when a group of them blocked the stairs and refused to let me pass on the stairs coming out of the 1st Ave L stop. Lest you think this was just some good-natured horseplay bro to bro I need to tell you I'm a 63 years old woman.

I should not be surprised Bull McCabe is a Santacon spot. I once got into a scrum there when a nerdy friend of mine was randomly picked on by an old frat boy Wall St type looking to fight someone, anyone. That guy did that because he had back-up who would take his side no matter what, which sure enough is what happened. But it all came to nothing because my friend pointed out to them that their girlfriends looked embarrassed, so the one kept saying "yeah keep talking" as he walked away.

I realized months later why this all happened. It's a Red Sox bar.

SO no arrests were made and only a couple of summonses were issued? Where were the police on Saturday? I saw none. What I did see were Santa's pelting passersby with snowballs, a few having shoving/punching matches and more than few wretching on the street. Funny how low the arrest numbers are - when you want them to be!!!

All this means is the NYPD doesn't want to do paperwork.

Hi I'm Eric. I actually need to get in touch with you again. You were so drunk that you mashed into my face and chipped my front tooth and I don't have insurance.:(

There were SantaConners open smoking doobies on East 9th Street at the start of the day, in front of cops. The only reason the arrests are non-existent is because the NYPD couldn't be bothered to enforce laws on the books.

This whole thing seems like Halloween now - a holiday meant for kids, that immature adults have co-opted. Grow up and let them have their day! It is not for you anymore.

The cops should squash this Santacon thing like Putin squashed Pussy Riot. They should take back Thompkins Square Park from the Santas just like they kicked out the homeless 20 years ago. They should teach the Santaconners that they have no right to party even if they fight. Why weren't the cops out there beating the shit out of people?! It's outrageous! Bloomberg must really love Santa. Can't wait for our new liberal mayor to get in there and fix this shit.

That's called getting your Santa On at Santa Con!

The Joe Jr. brawl video on 16th and 3rd is on every local news station today, plus cable, and reports say the cops are looking for these guys to make an arrest. All the NYPD has to do is find a bunch of guys with black eyes who are still wearing their Santa costumes, or hope that one of them comes forward to press charges. I for one am not holding my breath.

Regarding that public hand job at the Duane Reade on 3rd Avenue and 14th Street:
“Greg, honey, is it supposed to be this soft?”
With these Frat/Bro types, nothing ever seems to change.

I saw a Santa hat covered in feces in the bike lane today. Couldn't have said it better myself!

Chris Hayes weighed in on SantaCon on his national MSNBC show. “All In”, last night as a tie in from the Fox News War on Christmas, Fear of a Black Santa, silliness. He basically said that SantaCon allows the drunken St. Patrick’s Day louts to trade in their green for red and white. And here’s the question Chris posed to which all of the pro SantaCon defenders cannot answer. If the people streaming into the city to get publically drunk and fight were overwhelmingly black, official New York’s reaction would be a lot less Ho, Ho, Ho.

I think what Fox News anchor Megyn Kelly was trying to say was that all falling-down drunk Santas who get handjobs in the doorway of a Duane Reade on 14th Street are white. And I'm pretty sure that would be an accurate statement.

And to all the dumb drunken asswipes dressed up in red white and whatever colors - get a life, really. I party and have had massive fun in the same zip code you do (for many more years than you've been walking) - yet I have never had the scorn and condemnation that you assholes have brought upon yourselves by your actions. You can't go back to your collegiate days - they're OVER. Move on with life - you're not part of the Animal House cast any longer...