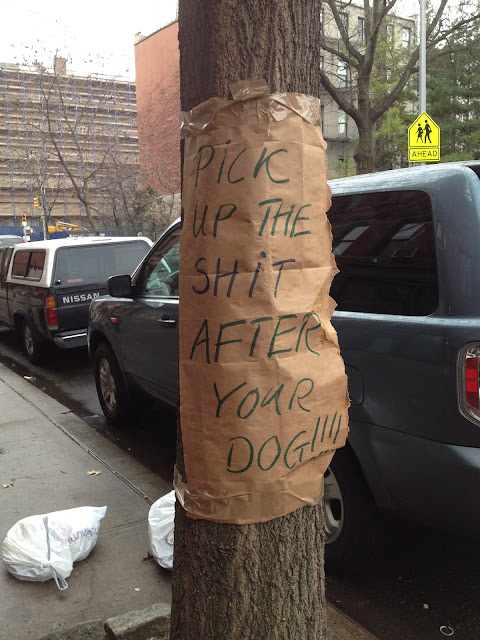 I live on the block of this now "legendary" sign (thanks to EVG) and there is always poop nearby. The more trees on a block the more people walk and sometime leave fido feces behind. It is probably due to a sense of self entitlement, too busy talking or texting on their phone, anarchist dog owners that want to stick it to the man (meaning their neighbors) or just plain lazy fucks.

I think they need to do some forensic testing the dog poop in the Bronx to make sure it's from dogs and not humans. We all know indoor plumbing is a new concept up there. DNA testing would confirm that the EV is tops in dog poop per person.

Also I think they somehow missed the huge steaming piles of horseshit on Central Park South, which you can smell from the balconies of the $5 million studio apartments across the street. But for some reason the tons of stinking crap from horses doesn't count, even though you could lose a small child in one of those warm gooey piles.

I saw the saddest thing yesterday...kept it to myself until now...an older man (in his 60s?) on 2nd Ave near 13th Street, 9:30 am, on the sidewalk, with his pants half-down, as if getting up from taking a crap. I looked away, didn't need to confirm it. People were getting off the bus right in front of him.

Tha's nothing a gang of well dressed 20 somethings stood in front of my house, one dropped her pants and took a long piss for the world to see. She and her friends were drunk (of course) but it was only 10:00 PM. Told them to pee in the bar which they just got drunk in and they answered me with that polite condescension only well raised girls know how give.

People on my block are very good at picking up their dog's poop. There's also very little graffiti. They're very similar, you know.

Just like in the suburbs people let dogs shit on someone else' lawn. Most of the people that walk dogs on my block don't live on it.

I have noticed that an increase of sidewalk poop does correspond with the influx of our seasonal, transit guests (May-October).

Second Street between First Avenue and Avenue A used to be the worst doggie toilet in the neighborhood in the mid '80's.