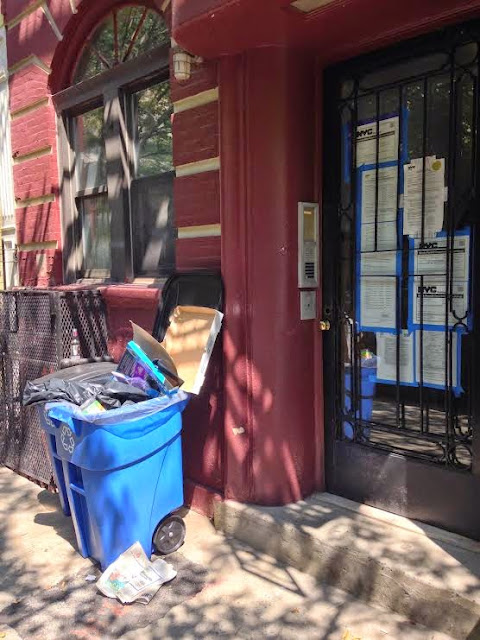 As previously reported, two tenants at 309 E. Eighth St. are suing their landlord, Steve Croman of 9300 Realty, claiming that he has has engaged in a "campaign of harassment, abuse and neglect" since taking over the property between Avenue B and Avenue C in December 2012.

Now five tenants have filed suit seeking a halt to construction at No. 309, as The Real Deal reported.

According to the suit, filed Aug. 7, the five tenants claim that the landlord has engaged in gut renovations of multiple vacant apartments at the building since 2013, causing the ceilings to collapse in several occupied apartments.

The renovations at the 17-unit building also caused a gas leak that resulted in a month-long gas suspension, according to lawyers for the tenants.

"I would say that this case is symptomatic of what is going on in the Lower East Side today," said attorney Sadia Rahman, who represents the five tenants. "Violations like the broken front door and broken cornices have been in place for years, but owners instead are investing considerable sums of money into vacant apartments so that they can be deregulated and rented at market value."

Meanwhile, Croman and his wife Harriet, an official with 9300 Realty, have been enjoying another August in the Hamptons. On Tuesday, Page Six reported that the Cromans "created a Playboy-themed bash ... complete with a replica of Hugh Hefner’s famed grotto in the center of a tent. Completing the theme, pale pink carpeting surrounded a dance floor."

In her Gimme Shelter column at the Post yesterday, Jennifer Gould Keil noted that the Cromans paid $650,000 this month to rent a Water Mill home "while their own beach mansion, in Sagaponack, is being built."

As for the Playboy bash, "some of Croman's guests told Gimme Shelter they wondered what the couple is celebrating."
Posted by Grieve at 5:05 AM

Man, this shit is writng itself now.

Between this post, and the one on Shakespeare&Co having their rent tripled, gotta say it.....

STEVE & HARRIET CROMANS ARE A CANCER IN THIS CITY

Is that's what the Cromans do with their money ??? - renting a house inthe Hamptons for $650,000.00 for only one month? A Hideous Playboy themed bash with a replica of Hugh Hefner's grotto in the center surrounded by pink carpeting- How tacky can any one be ? People like that don't deserve money. Well, party-up Mr.& Mrs.Croman because your Karma's about to come to you.

Dinally the truth is out. Thank you EV Grieve

It would be great if the Cromans paid their city fines which now run in the millions of dollars. Perhaps that would be incentive for them to keep their buildings clean and well maintained for a change!

The comments under this Real Deal article from Jill Stone, whose comment history shows a real admiration for abusive moguls, and Marc, who posts in a similar tone, are hilarious. If they're the Cromans, the comments are even funnier. I agree. This is indeed writing itself. http://therealdeal.com/blog/2014/08/14/tenants-sue-to-stop-croman-from-renovating-les-tenement/

They are my landlords and they are criminals in my mind. Karma is a bitch, and it's going to bite them big time very soon !