Given the recent news about the Sunshine Hotel downsizing its space to make way for commercial office tenants … we thought we'd replay this post that first appeared here on July 19, 2012. 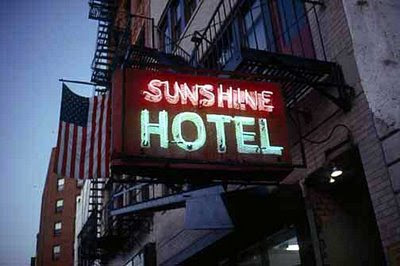 In 1999, filmmaker-photojournalist Michael Dominic set out to document the residents at the Sunshine Hotel, one of the few remaining flophouses on the Bowery. He wanted to know more about the men who had been living there, in four-by-six-foot cubicles topped by a ceiling made of chicken wire, with no particular place to go.

Dominic's ensuing documentary, "Sunshine Hotel," released in 2001, received a slew of festival awards and played on the Sundance Channel. The independently funded film was recently released on DVD for the first time. On this occasion, Dominic answered a few questions via email for us.

Have you been back to the hotel in recent years? Have you received any updates about the people who you featured in the film?

I pass by the hotel all the time but haven't been inside since 2002. But I have kept track of the changes to the hotel and the area. As far as I know, none of the residents that I knew are still living there. Many I know for a fact have died. The owners have stopped allowing new tenants and there are only a handful living in one section of the building now. [Updated: Dominic has learned that two of the men in the film, Bruce Davis and Tyrone, are still living at the hotel.]

The sister of one of my subjects in the film named Vic contacted me recently. He died in 2006, but she only found him again after nearly 50 years through my film. She and her brothers were able to gain some sort of closure after a very long time of believing he was a missing person. It was a moving experience. 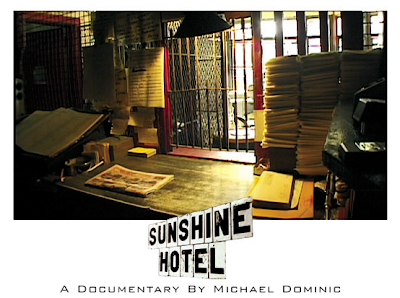 For you, what are the most profound changes of the Bowery during which the film is set and the Bowery of today?

The Bowery is ever changing. Now it's on an upswing. On the ground floor of the Sunshine Hotel there is a new restaurant and an art gallery. It looks like they're planning another restaurant as well on the corner. As soon as the last of the tenants leave the Sunshine, I'm sure that they will convert the buildings into luxury housing.

When I shot Sunshine Hotel back in 1999, the Bowery was already what I thought of as gentrified. But now, looking back, that wasn't anything. Certain parts have been completely rebuilt and there's really nothing left of the old strip as far as the goings on. There are expensive restaurants, hotels and apartment buildings — and there isn't a single actual flophouse on the Bowery anymore.

Is that a bad thing? Times change and probably a long strip of drunken homeless men running through the center of the Lower East Side isn't the best idea. Still, when I look at the Whole Foods on the corner of Bowery and Houston, it leaves a bad taste in my mouth.

The DVD release allows a new audience to experience the film. What would you like people to take away from "The Sunshine Hotel"?

People should remember what NYC was. They should remember it as something unique and beautiful, albeit seedy. We as a city have overdone it on clean-up. We have lost character. I hope that my film caught a little of the last of that era of New York, "when the Bowery was the Bowery." 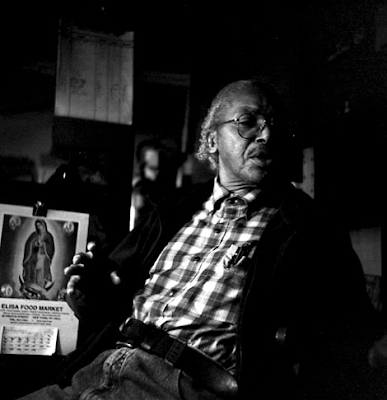 Some 13 years later, what has stayed with you about making this film?

Nathan [Smith — the hotel's manager]. His friendship. He died 10 years ago, but rarely a day goes by that I don't think about him. 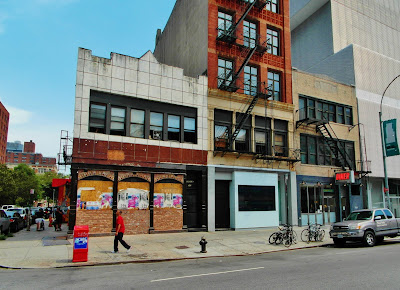 [Yesterday outside the Sunshine... photo by Bobby Williams]

You can buy the DVD here ... it's also available on Amazon. Dominic is now working on a documentary titled "Clean Hands," which chronicles the residents of La Chureca — Nicaragua’s largest, most dangerous garbage dump.
Posted by Grieve at 4:55 AM

you can relive the good old days via the film 'on the bowery', directed by lionel rogosin.

I spent some years on the Bowery (1967-1971). My first flophouse was The Sunshine Hotel. It was a grim introduction to the flophouse culture of the Bowery. I spent nights at the The Palace, The Kenton, The Uncle Sam and The White House during those years. Twenty years later I wrote about the Bowery for the Village Voice. Photographer Sylvia Plachy took a shot of me one night, after a snow storm, in front of the Sunshine Hotel, only the "S" had failed to light so we had the unshine Hotel. That it was.

Bruce should have is own show! WHAT A CHARACTER.

Bruce. He could have been in the movies, but instead fate landed him on the other side. The last reference to him I found was that he was still living in the Sunshine in 2004. Probably deceased by now, but there are things in this life that you will never get to know the answer to. Lots of them actually.