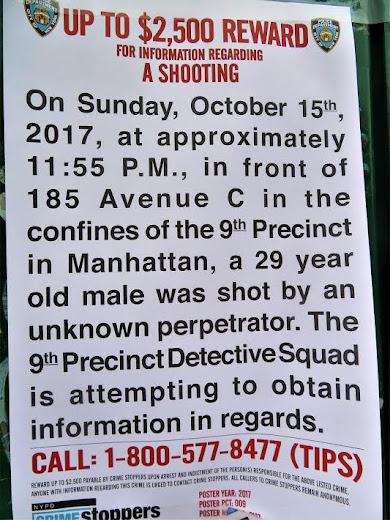 Detectives from the 9th Precinct continue to investigate the late-night shooting on Avenue C at 11th Street. The $2,500 reward posters arrived yesterday.

There is very little information about the shooting in circulation. According to previous reports, a 29-year-old man was shot multiple times as he was riding a bike along Avenue C. He took himself to Bellevue Hospital, where he was initially in serious but stable condition. He was reportedly cooperating with the police. The only description of the shooter: He was wearing a black hoodie and black ski mask. It was not clear if the cyclist was the intended victim.

Anyone with information that could help in the investigation is asked to call Crime Stoppers at 1-800-577-TIPS (8477). You may also submit tips online.
Posted by Grieve at 4:30 AM

Hmmm! I thought DeBlasio stated the crime in NYC is at a record low under his administration. REALLY?

That's why, as always, it's important to delve into the numbers; it can be said "overall" crime, murder rates etc. are down but that doesn't mean it's true across the board in regard to certain locations/areas (e.g. NYCHA)

Not to trivialize the event, but what a classic poster! "in the confines of the" - who came up with that line? That "9thPrecinctDetectiveSquad" with no spacing. "information in regards" - great police talk!

Police in NYC have been using language like that since the 19th century. Read a book.

Give the cops a break and let them do their job. 9th is among the best in NYC. Much credit to its captain.

No spacing? Check the typesetting. That's to fit it on the same line.

The world and this town are run by suit and tie criminals but the cops from the 9th do a good job. Don't hate the player, hate the game.

Crime on the Alphabet Avenues would end if they had two beat cops walking and a patrol car driving down each avenue. That's four cops an avenue for sixteen cops total.

Put a mini-police station on Avenue C next to the projects, too.

There is a police station on avenue c already.