The HiFi Bar, home of NYC's best jukebox, is closing at the end of the month 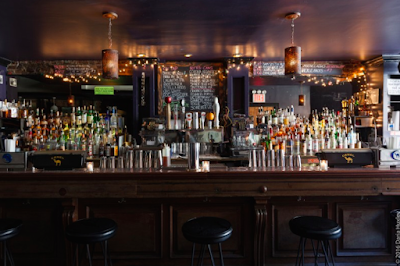 Late yesterday afternoon, Mike Stuto, the co-owner of HiFi on Avenue A between 10th Street and 11th Street, announced that the bar will close at the end of October (Oct. 29 is the last day) after 15 years.

In a letter posted on his Facebook page, Stuto said that business has been off, noting that the weekend bar crowd was "mostly indifferent to the place." He also stressed that the closure had nothing to do with the landlord, a management company that he said has been "ideal ... in pretty much every sense of the word."

Stuto gave me his OK to share the letter that he posted:

I (sorta) regret to inform you that my bar HiFi will be closing at the end of this calendar month, ending my 23 year tenure at 169 Avenue A. All parties booked before the end of the month will happen as planned.

The story? Quite simply, the renovations we undertook a few years ago to reinvigorate the business were not successful in putting us back on a good financial footing. The generation of people who inhabit this neighborhood on weekends remain mostly indifferent to the place. HiFi seems to occupy a place square in the middle between "dive bar" and "mixologist paradise" — and while I hoped that would help us have a broad appeal to the newbies, it turns out that it translated as utilitarian (aka boring) to their tastes.

Could we have pivoted again? Yeah I guess so, but it turns out that I only want to run a bar if its one that I would want to hang out in. Otherwise it'd just be a job I have no passion for. And I don't want to live like that.

I want it to be clear that the building's landlord is in no way to blame for this outcome. Yes, the commercial rents in this neighborhood are all over-the-top insane, but at every turn, throughout the roughly 20 years that Time Equities has managed the building they have been an ideal landlord in pretty much every sense of the word. I have been lucky and honored to work with them and to know that there are good honorable people everywhere, even in nyc commercial real estate. Who woulda thunk it?

For the past 18 months or so I have known this outcome was inevitable, and in that time I have passed through all of the "stages of grief" about this era of my life coming to an end. There is no shame in being a 50 year old who no longer knows how to appeal to 25 year olds. So while this is at best a bittersweet moment, I am happy with the end result and very excited about what the future may bring.

The space was previously Brownies, the celebrated live music venue that opened in 1989. Stuto, who worked in the record business in several capacities, started booking shows at Brownies in early 1994. After a stint at Columbia Records, Stuto returned to Brownies a few years later, this time as a partner.

In 2002, after Brownies had a successful run, Stuto and Co. turned the space into HiFi, home of EL-DJ, the homemade digital jukebox he created with 4,000-plus tracks ... which is arguably the best jukebox in town.

(You can read more about Stuto and the bars in this Out and About in the East Village feature from February 2014.)

In the past two years, HiFi returned to hosting music as well as comedy nights and book readings.
Posted by Grieve at 4:30 AM

Email ThisBlogThis!Share to TwitterShare to FacebookShare to Pinterest
Labels: HiFi

I was in the past Saturday late-night for some good times, dancing, and a photo booth shoot; just what my friends and I wanted. Best of luck to all those involved and who are now moving on.

Millennials are simple. They just want to discover (like Christopher Columbus did, but without all those ships) their own locally-sourced, hand-crafted beverage with its own unique storyline, served by a mixologist with an encyclopedic knowledge of alcohol manufacturing processes and beverage ingredients, so that they can share their unique and personal drinking experience with a curated selection of their very best friends online. And then they want to move onto discovering yet another fascinating hand-crafted beverage in yet another bar that they just saw on their Instagram feed a minute ago, not because they get bored easily (which they do), but because life is much too short for their finely-tuned tastebuds to be loyal or tied down to any one bar or drink or neighborhood for more than a minute. And they want a bar that is big and loud and filled with indecipherable drink menus with funny names and other theme-park style distractions to provide the same experience that people used to get just by having great conversations in the same old relatively quiet bars with the same old boring drinks and same old boring people year after year. YOLO.

A very nicely written letter, but so sad.
Very sorry to read this - Good Wishes to the Owner(s)

best wishes to mike stuto on his future endeavors! such a good, upstanding guy and a vibrant presence: i know he will be successful in whatever he chooses to do. but lord, i will miss hi-fi!

I have been going here since 1990 and am sad to see the place go.

Should have kept the pool table. :(

what a graceful letter from Stuto. Good to hear that positive commercial landlord relationships are still possible in this day and age but truly a shame the bar's reboot didn't take. There is never enough music, whether thoughtfully provided by performance or programming, in the EV's nightlife. HiFi's departure will dent that needed supply.

What Giovanni said. I now truly join my father circa 1965 in saying, I don't get these kids. But I guess they own this neighborhood now. It was fun while it lasted.

Very, very well stated Giovianni. It's hard to be faithful when you have options. Ask any rich man or beautiful woman.

Personally, I blame Baskin Robbins. They started this BS with their 31 flavors. Listen kid, there are only two flavors: chocolate and vanilla.
And maybe strawberry but that's it!

This is a shame. I used to enjoy shows at Brownies and this was the first bar/entertainment place I went to after 9/11 when everyone was feeling guilty about going out and enjoying themselves. There were maybe ten people in there, including the band, and halfway through the set, we were all crying. We all hugged each other and the band convinced people to stay and the show went on.

More recently. I've enjoyed the place as it's not a loud obnoxious bro bar and is still a place where they know your name and make you feel at home. Sadly, that's hard to find anymore.

Aw, this is terrible news. I don't live anywhere near the East Village anymore, but I've made the pilgrimage from way uptown for many shows. Amy Rigby's four-week run of shows from a couple years back was one of the best concert experiences I've ever had.

Sadly, the new young residents of the neighborhood want to go into a place where they can be loud and obnoxious. They want to get trashed and yell, and there are plenty of places that accommodate them.

@10:42 AM Agreed! Baskin Robbins was the beginning of the end of quality, and the beginning of the mass retail illusion of individuality and “choice.” 31 Flavors meant 2 or 3 good ones and a lot of mostly bad ones, especially Bubble Gum, but the whole point was to lure adult customers in so they would press their noses to the glass and say “oooh look at all those flavors” and then 50% of them would order chocolate or vanilla anyway. But their children were forever ruined, trained to demand endless variety no matter how bizrre the flavorpill combinations were. Even Ben & Jerry’s can’t figure out what flavor combinations they want anymore. That’s why HiFi is leaving. It’s just not specal” enough for Millennials when they can do Jell-O shots of vodka and chili infused Japanese blowfish innards while sitting poolside on a rooftop in Chelsea while Will Smith’s bizarre new EDM track blasts at 120 dB, followed by Cardi B’s #1 incoherent brag rap, which just knocked Taylor Swifts “Look What You Made Me Doo Doo” revenge loop off the top of the charts. The motto of the music business these days should be, “You can't spell “shit” without “hit”. HiFi is analog in a digital age. Pass the wasabi flavored Doritos.

Super sad for Mike, who ran a great bar and the new renovations were fantastic. Lots of new live shows, awesome backroom, comedy shows, and fantastic staff. I lived above the bar for 13 years and used to go when it was Brownie's.

I sat in the window often and would watch people walk by, look up, get a puzzled look on their faces, and then keep going. Same happens with Josie's.

The space next door is cursed / doomed restaurant space and nothing ever really took there. Now all that's left on this block are Tompkins Square Bagels and Westville - ironically, East Village institutions, much like HiFi bar was.

With all the foot traffic you'd think just opening on Ave A would make it a goldmine. It's going to be interesting to see what happens here, as the block association doesn't want another bar, and Ave A up near 11th, 12th, 13th is quite barren.

With the luxury condos literally next door, one wonders if catering a business to them makes sense? Like a high-end food shop / deli etc.

Sad to see a neighborhood institution go, and a gracious note from the owner. Bizarre millennial-bashing response from the commenters, who do you think is keeping Lucy's, or Sophie's, or international, or any of the other classics in business?

With rents going up, daddy's credit card can only go so far. Btw, @3:44pm have you been to International Bar? Most of the regulars are not millenials.

You pretty much nailed it.

This bar belonged in Brooklyn. The bozos in the East Village on Friday nights wouldn't know good music if it bit them in the ass.