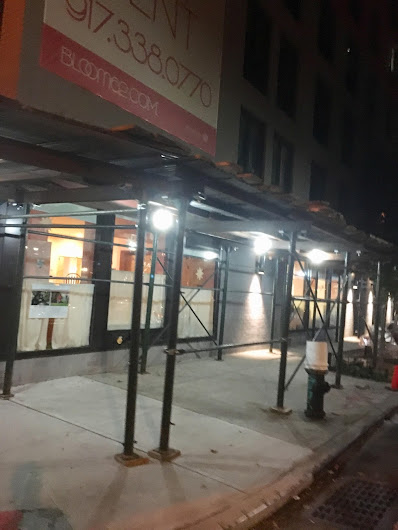 A sidewalk bridge arrived back on Thursday to surround the soon-to-be-former Bloom 62 on Avenue B and Fifth Street.

Ben Shaoul, president of Magnum Real Estate Group, is in the process of redeveloping the rental property into a condoplex called Liberty Toye. (Read my post on this here.)

There's nothing on file with the DOB yet to shed any light on what work is going to take place here. (There is a permit for the sidewalk bridge.)

"Initially, we expect to see a small number of sales in bitcoins. But over the next five or 10 years, I could see up to 25 percent of payments happening in bitcoin or a like digital currency.

"It's going to be the future," he continued, "and a lot of developers will start to adapt and offer the same option." 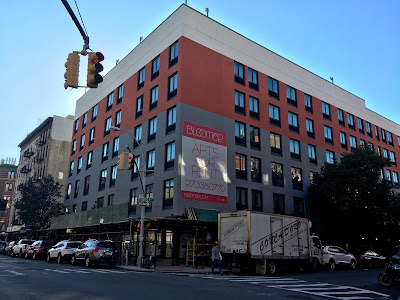 Shaoul was also featured in this Global Mansion article on cryptocurrency in the global real-estate market.

"Our buyer has evolved, they've moved from mom and pops to young people who want to pay with various forms of payment. Cryptocurrency is something that has been asked of us — 'Can you take cryptocurrency? Can we pay that way?' — and of course when somebody wants to pay you with a different form of payment, you're going to try to work with them and give them what they want, especially in a very busy real estate market."

Shaoul ... admits that there is currently a lot of inventory in the market, and therefore having an edge over his competitors is especially key. Bitcoin, he hopes, will be that edge.

"I think the demographic of the crypto user is a younger millennial, but, that being said, you have a lot of people come over from other countries, who are buyers from different places, who like to trade in different types of currency. Not everyone wants to trade in dollars or yen or euros," Shaoul said.

And he claims there is already a lot of interest in Liberty Toye, though not necessarily from current renters or NYC residents.

Since he announced that he’ll accept bitcoin for purchases in his East Village project a few days ago, Mr. Shaoul said he’s received dozens of emails and calls expressing interest from overseas buyers in China and other Asian countries.

The Liberty Toye office will be at 44 Avenue B between Third Street and Fourth Street in a former laundromat owned by Steve Croman. 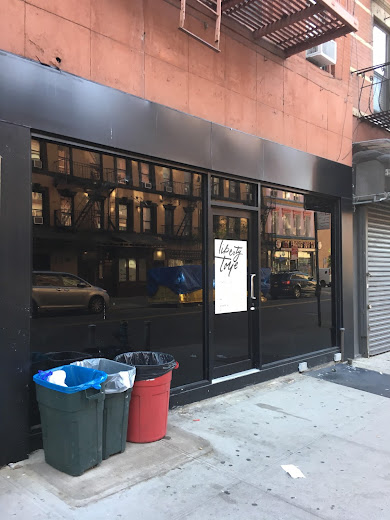 Before becoming a place for wealthy overseas buyers, the building at Fifth Street was home to Cabrini, which closed for good on June 30, 2012. The 240-bed center — sponsored by the Missionary Sisters of the Sacred Heart of Jesus — provided health care for low-income elderly residents in the East Village. Cabrini opened in 1993 and served 240 patients and employed nearly 300 people. Shaoul reportedly paid $25 million for the property and closed down Cabrini.

1st signs of Ben Shaoul's Bloom 62 going condo on Avenue B?
Posted by Grieve at 4:30 AM

Great. More non-residents and non-citizens buying up NYC real estate so they can park their money - eh, Bitcoins - away from their governments, and then leaving their apartments empty year-round, generating nothing of value for either the neighborhood or the city, only the developer.

These crappy Ben Shaoul condo conversions obviously aren't selling, so why not take bitcoins fom foreign investors who will rent them out to to other foreigners on Air BnB? Who needs actual residents when you can have shell corporations and hedge funds investing cryptocurrency into your CryptoNeighborhood? This is what happenes when real estate development is only about making as much money as possible and not about creating housing that people need.

FFS. Just when I thought this guy couldn't be a worse human being, he lowers the bar.

Sounds like he's advertising this project as an even better way to launder your stolen oligarchic gains than the usual NYC development.

Why do the SELLERS never get any heat? These long term residents/property owners are the ones selling their property and cashing in. Where is the scorn for them? Long term residents who are held up as role models are the ones destroying the neighborhood by selling out. Blaming the buyers and developers is the easy thing. Look around the neighborhood. The sellers are just as bad if not worse.

Anon. 3:02, stop beating the "Sellers are evil! They're the only ones bringing Millennials into the neighborhood! It's their fault we're overrun!" horse, wouldja? This from Grieve 2012:

In November, we reported that developer Ben Shaoul was the mystery buyer of Cabrini. The building's previous owner was an unnamed family trust who, according to the Lo-Down, sold Cabrini for $25.5 million.

So, no long-term resident of any sort here, but a mystery family trust, ergo, nothing to be done. And oh yeah, IN NO WORLD are the sellers "as bad if not worse" than the developers. Get real.

You don't have developers without sellers. You think a mystery family trust aren't long term residents who dont want people to know they sold for 25.5? Get real.

I can't buy a Van Leeuwen ice cream cone with a ten dollar bill, but I can buy a 1.5 million dollar condo with bitcoins. What a world.

Oh ok, that sounds totally above board and not shady.