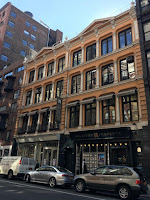 The proposal to landmark 827-831 Broadway received unanimous support during a public hearing with the Landmarks Preservation Commission (LPC) back on Tuesday.

So those plans for a 14-floor office building on this property may be permanently on hold.

The Greenwich Village Society for Historic Preservation (GVSHP) has campaigned the past 18-plus months to preserve these buidlings.

Here's part of a report they sent out yesterday:

GVSHP was joined by Councilmember Rosie Mendez, neighbors, and scores of supporters on for the public hearing on our proposal to landmark 827-831 Broadway. The 1866 lofts, formerly home to Willem de Kooning and other art world luminaries, had faced the wrecking ball. Read GVSHP’s testimony here.

Members of the LPC, who will decide the building’s fate, also expressed strong support for designation, and stated that a vote would take place on Oct. 31 (time TBD). Once the LPC votes to designate, the building is landmarked and protected, though temporary protections are in place now.

An attorney for the developer ... stated that the owner opposed landmark designation, and asserted that he would have a hardship case if the building were designated and he were not allowed to develop the site (the law enables owners of private property to be relieved of landmarks requirements if they can demonstrate, through a public hearing process, that they cannot make a “reasonable return” on the property while abiding by landmarks requirements).

The owner’s lawyer also said that, if the building is landmarked, they would seek approval from the LPC to build some sort of addition to the building in order to make a reasonable return (this too would require a public hearing and review process).

GVSHP Executive Director Andrew Berman co-authored an op-ed at the Times in early August, providing more history of the addresses and making the case for why they should be landmarked.

City moves to potentially landmark 827-831 Broadway
Posted by Grieve at 4:10 AM

It's a warning. A shot across their bow. Stay away. We'll fight back! Great victory!

I can't believe we might actually win one. What would we do without GVSHP?! These people are amazing!

My heart bleeds for that poor developer; yeah, he's a real hardship case.

Oh, and anyone who admires the invaluable work GVSHP does can send them a little monetary token of their admiration; don't be shy!