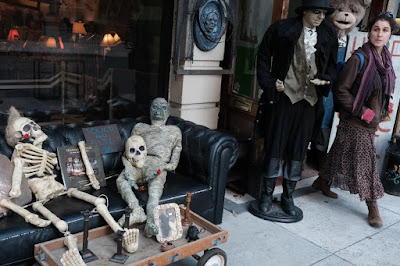 Five years after Sandy, city lags on storm-proofing, rebuilding projects (Daily News) ... and inside the failure of the Build It Back program (Curbed)

A visit to Streecha on Seventh Street (The New Yorker ... previously)

A a "knock out game" assault on Essex Street (DNAinfo)

More about the new community garden next to Project Renewal (Patch)

Jean-Georges "delivers the city's worst new restaurant with Public Kitchen" at the Public Hotel on Chrystie Street ... "where a round of pre-dinner drinks for four, including a margarita whose aggressive sugars recall Kool-Aid demi-glace, costs $83." (Eater)

The Ron English pop-up at Toy Tokyo, 91 Second Ave. between Fifth Street and Sixth Street, debuted on Oct. 20 (coverage here) ... it will remain open through Nov. 20... 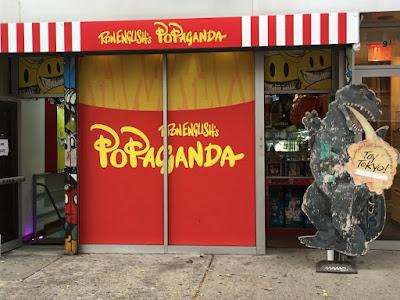 Is Ron English trying to get sued by Disney?

Because hes using a similar font as Disney? Fonts companies use are not permitted to be used by businesses? Not a rhetorical question. Someone enlighten me.

For what it's worth, Public Kitchen has a 4-star average on Yelp.

Select Bus... is that the one with the cute flashing lights, that the MTA promises it will try to move a little faster, and ticket anyone who tries to get in its way? LOL I still get a good laugh over that so-called idea.

That font is based on Disney's logo, it's not technically legal. Yes, it exists, someone made it. But the Disney "D" is clearly apparent in the Ps, and if they really wanted to to, Disney could sue because it could be interpreted as a Disney enterprise. The rest of the characters would be fine.

I love Ron English and his art is about commercialism and consumerism. Go to the gallery and check it out. The font makes sense in the context of what he's doing.