Reports of shots fired on Avenue C and 11th Street 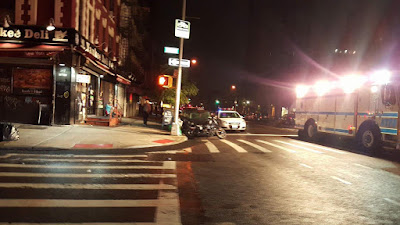 According to Christopher J. Ryan, who shared the below photos, the shots came from the east side of Avenue C outside Avenue C Pharmacy, with bullets hitting a building across the Avenue as well as the bus shelter. 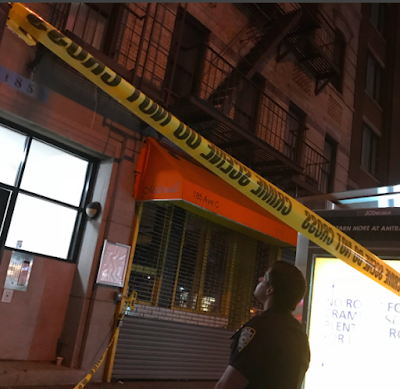 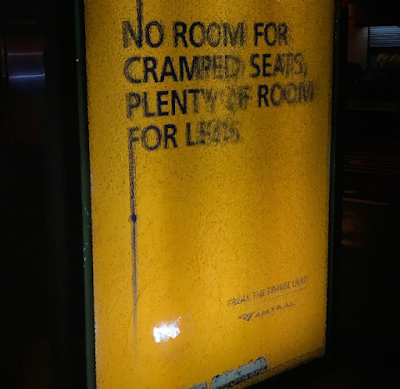 One person was reportedly shot and transferred to Bellevue. It was not known if he/she was the intended target. Police are apparently searching for three suspects one suspect.

Will update the story when more information becomes available.

The Post reports that a 29-year-old man was shot multiple times as he was riding a bike along Avenue C.

The cyclist, who was struck once in the torso and once in the arm, managed to flee and took himself to Bellevue Hospital, where he is in serious but stable condition.

Police are looking for one suspect. The Post reports that the victim is cooperating with the NYPD. The article does not say if the man was the intended target.

Per DNAinfo: "The shooter wore a black hoodie, according to a police source. A black hoodie and a black ski mask were recovered near the site of the shooting, the source said."

Here's surveillance video from when the shots were fired on the east side of Avenue C...

Never a dull moment. Here’s a shooting last night outside my house. ( white flashes above the white car )

I heard these shots as well. Sad that I knew they weren't fireworks.

Surely, this incident is being put on file for the coming Night Mayor.

Except for some giant spotlights this high crime (multiple shootings ) area shows little police presence,
Only. Three blocks from a police precinct and at a busy bus stop & 24 hr deli.Despite gentrification
and New Condos there is still some drug dealing happening there as well as lower Ave D.Spotlights there too
One has to think somebody’s not paying enough attention to all of this .12 midnight is not that late on a Sunday?

And this used to be such a nice safe neighbohood.

This, and the woman who was shot the other night while getting out of a cab on Rivington is scary. I keep telling people that the area is not as safe as the real estate brokers would have you think. There seems to be a lot more street violence within the last 5 years or so.

get some cops walking the streets.. not sitting in cars on phones.

..... the police spotlights on 12th street & avenue c just got shut off few weeks ago.

What do you people want? If the cops get aggressive you scream racism and police brutality and call the CCRB. If the cops back off you complain that they eat donuts and stare at their phones all day. Here's the reality. No cop wants to be the next YouTube star and be crucified by the left wing 'mainstream' media 24/7. Get used to hands off policing in the city. You think the soon to be reelected Mayor cares about any of this? He doesn't. It is funny seeing all these folks who pine for the old days whining about a couple of shootings. Its all ridiculous.

Not to borrow any drama but we were walking Miss Kita the Wonder Dog right where the gunman stood maybe 45 minutes earlier. Yikes. xo

3:16 nailed it. You want to march and protest because the NYPD wants to put up a tower? Well, this is what you get.

Interesting how this gets far less outrage than if someone wanted to open up a rolled ice cream place, cafe, or bar. Full-on protests if someone wants to open a starbucks, but a young man gets shot and barely a shrug.

This is my heartfelt response for 3:28:

Shame on you! Where is your empathy? Is violence somehow comical now? I certainly don't think it is.

Someone could have died. More could have been severely injured in the crossfire. As someone who resides on 7th and C, I find this entire incident terrifying. My phone lit up when it actually happened as I have the mobile app,"Citizen" which alerts neighbors and those nearby something bad has happened or is happening.

BTW, this isn't Law & Order the TV show. This is real life. Like others, I am freaked out. We all need to keep a safe watch for one another. I hope this coward who shot the victim is apprehended and brought to justice. I also hope the young man who was shot can heal and get well. Best wishes to him.

Hello, has anyone noticed an increase in drug users in the area? There are lots of dealers vying for territory.

3:16 is truth. There was a police tower at 12 and C after a shooting and the real estate people kept asking the cops if it was really necessary because it was scaring people coming to view their over-priced condos.

I didn't get why people were protesting the nypd tower at the park. If the cops need it, what's the issue?

Didn't know about the tower at 12th and c. Interesting...so it was real estate dollars again at work. There will soon be the new condos up for sale around the block on 14th Street and B/A. Surely they want a safe neighborhood now?

Not sure if anyone has realized the depth of this incident. It's literally bullets that could have struck anybody. . And any other vehicle as well. I thought stuff like that was only in the Bronx where kids/passers by are struck by stray bullets.

This stuff isn't limited to drug dealer violence only......

"I didn't get why people were protesting the nypd tower at the park. If the cops need it, what's the issue?"

And when cops need armor-plated tanks and hollow-point bullets, what'll be the issue?

Anyhow, speaking of empathy, and speaking only for myself, a lifetime of dealing with people's head-in-the-sand attitudes and overall self-delusion has a way of stripping one of their empathy. As the old saying goes, 'you break it, you buy it,' and the American people through their willful ignorance have busted this joint and all that seems left to do is fiddle and watch it burn.

Is violence comical? I dunno, ask Hollywood. It's a $50 billion industry. Someone's buying.

Someone could have died. Yup. Leave the U.S. and stray away from the Potemkin resort towns and you'll learn a valuable lesson: life is cheap. Life is Cheap -- coming to a neighborhood near you.

Hi, 3:16. An idea: How about, instead of wildly disingenuously pretending that there’s no middle ground between cops eating donuts & cops getting “crucified” (i.e., talked about negatively in the press for a few weeks, and invariably being found not guilty of misconduct), you acknowledge that there’s a middle ground? In which cops are responsive to neighborhood concerns, and don’t get so carried away with panic and/or racism as to be needlessly and ineptly violent? Here’s another scenario: If the worst should come to pass and you fire shots on duty, injuring or killing someone, attend to them rather than hiding someplace and calling your union. Yet another scenario: How about, instead of threatening the people you’re meant to be protecting with “hands off policing” as punishment for being insufficiently deferential, you get on with doing your job?

I spoke to the perp after as I live on the corner and he said he was upset about the bottomless brunch lawsuit.

Two beat cops and a patrol car down every alphabet avenue 10pm to 6am daily plus a mini-police station on Avenue C ends this shit.