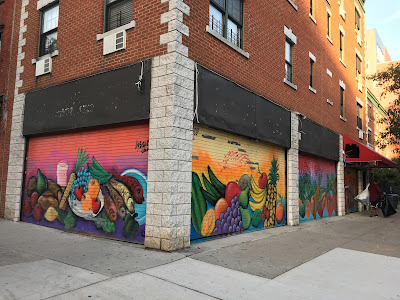 In August, the New York Health Choice (aka Eastside Market) went dark on Avenue C at 11th Street. However, the signage remained up, and there was some talk that the store would eventually reopen.

But this past week, workers removed all the store signage... and the storefront is no longer on the rental market.

The market opened in December 2012. They closed for renovations starting in December 2015 ... returning to business in May 2016. It was operated by the owners of Yankee Deli across 11th Street.
Posted by Grieve at 4:03 AM

If they changed the name to Unhealthy Choice, everyone would go there.

Think it was ok while it lasted. A much needed neighborhood outlet.