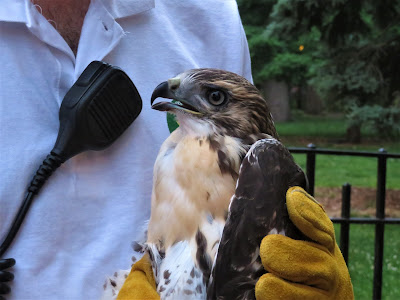 [Photo from June by Bobby Williams]

Goggla has sad news about Flatbush, the red-tailed hawk fledgling that Christo and Dora fostered this past summer in Tompkins Square Park.

As she reported yesterday:

He apparently suffered a fatal collision on August 15, which was likely caused by the effects of West Nile virus.

A resident found Flatbush on a balcony at Avenue C and 10th Street on Aug. 15. The discovery was shared with Audubon. The completed lab work showed that Flatbush tested positive for West Nile.

West Nile virus is transmitted by infected mosquitoes that bite the bird. Flatbush did not display any obvious signs of illness, but the virus does not always show itself, and it may have affected him very quickly.

Head over to Goggla's site here for more details.

In June, Ranger Rob (aka Rob Mastrianni, a Manhattan Ranger supervisor) released a juvenile red-tailed hawk into the Park that had been injured earlier in the month in Brooklyn. He was nicknamed Flatbush, as he fell from a nest on Flatbush Avenue. 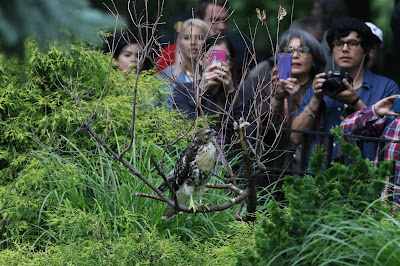 [Photo from June by Steven]

Previously on EV Grieve:
Flatbush puts on an early-evening show in Tompkins Square Park
Posted by Grieve at 8:30 AM

How sad. I love seeing the hawks in the park. I hope he didn't suffer.

Oh, how sad...so sorry, Flatbush, you were a lovely addition to the neighborhood. RIP, sweetie.

I am very sad.Poor thing I was there when Ranger Rob brought him into the park - thought it was so cool...

So this means that mosquitos in the area can be carrying west nile virus?

That is very tragic.

@1:00pm: I would assume that is what it means. Which should make us all the more aware for ourselves and our pets as well.

Not a bird expert or a scientist, but isn't it late in the year for mosquito borne diseases to be spreading?