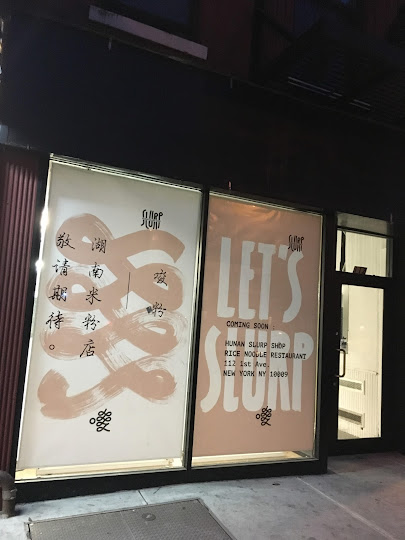 The coming-soon signage is up at 112 First Ave., where Hunan Slurp Shop will presumably be serving rice noodles here between Seventh Street and Sixth Street... 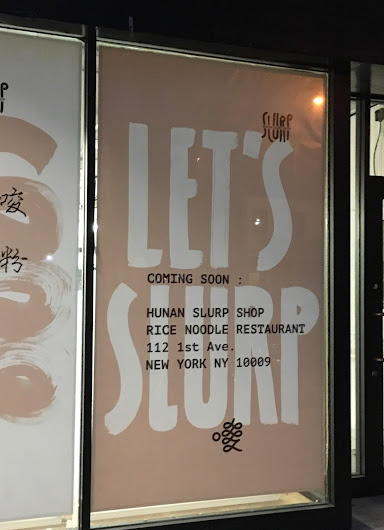 Not sure who's behind the venture just yet. (Has a familiar ring to Ivan Ramen Slurp Shop in the Gotham West Market.)

The retail listing for No. 112 mentioned a garden. So perhaps the Slurp Shop will have seating out there.

The storefront was previously a Ricky's, which closed in April 2016.

Before Ricky's, the space was home until 2007 to Miracle Grill. The restaurant's garden space was where the residential building is now at 92 E. Seventh St. (No. 92, which was the salon connected to Ricky's, appears to still be for rent as a separate storefront.)

The Ricky's on 1st Avenue has apparently closed
Posted by Grieve at 4:10 AM

Rice noodles is not ramen

Oh boy - I read the headline of the post as "Hunan Slop Shop". Guess I'm glad it's Friday!

So did I.. maybe EVG did it on purpose to increase readership

Beat me to it. So did I, I read it as "Human Slurp Shop". Just hope hope Soylent Green isn't on the menu. If it is, don't order it, people.

"Human Slurp Shop" would've been a great Halloween-only opening day promotion, if they were savvy.