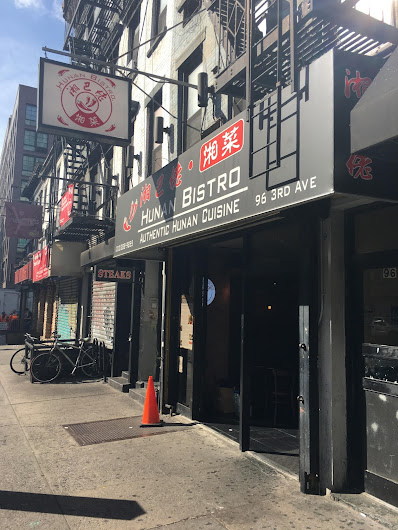 These are restaurants where "it is possible to enjoy two courses and a glass of wine or dessert for $40 or less (tax and gratuity not included)."

Here's more from the news release: "A Bib Gourmand designation, reserved for a select number of restaurants rated by Michelin’s team of anonymous food inspectors, denotes establishments where diners can enjoy a great meal for a good value."

Thirteen East Village restaurants made the list of 120 overall for NYC:

• Donostia, 155 Avenue B between Ninth Street and 10th Street

• Prune, 54 E. First At. between First Avenue and Second Avenue

• Somtum Der, 85 Avenue A between Fifth Street and Sixth Street

The 2018 Michelin-starred restaurants for New York City will be released on Monday.
Posted by Grieve at 4:00 AM

I won’t eat at blah-tapas place Donostia since I learned that the owner is PS64 vandal Gregg Singer’s Number 1 advocate. But I’ve eaten at many of the rest, and they’re good! We are blessed to have all these great semi-affordable restaurants in the nabe

Feh. Momofuku too salty. If you ask me a bowl or plate of food in a nice restaurant should be edible to the last bite.

Glad to see Luzzo's getting some love.

you won't eat at donostia because the owner doesn't want a vacant eyesore on his block? how is a small business supposed to get by on that block? have some compassion even if you don't like Siinger. Also I'm surprised to see Supper, that place is expensive!

I would avoid Má Lá project as they're disrespectful to the tenants at their building. I heard that they've already been fined for the huge amount of vibration their ventilation system produces in their building. But I'd like to try Prune, I heard the food is really delicious.

Hunan Bistro? really? With Han Dynasty next door? Did these people even eat at the restaurants

It's possible some "missing" places (like Hearth) will be on the main "starred" list that gets published soon. Btw also defend Donostia, very pleasant place, modest, and entitled to their opinion.

Hunan Bistro has had a "Grade Pending" health dept. sign for a long time. Maybe the Michelin reviewers didn't quite understand that. I am always amazed to see people eating there despite the health notice.

@12:28pm: Are there still big lines outside Tim Wo Han? I gave up trying to get in there ages ago.

It's not that hard to get into Tim Wo Han for lunch. You leave your name, and they will call you. I've gotten a table within 30 minutes. The food is very good and reasonably priced and deserving of a Bib.

Agreed with above on price being suspect for "value", Prune and Supper are going to be $75 a person with an app, entree, and one glass of wine, tax and tip. These are great places but their value is very subjective. Michelin should stick to the high end and let actual value places exist out of its purported elitist nonsense.

Donostia is on the ban list for me too as they supported the full liquor backyard 2am bullshit that Soothesayer was going for, and the owners were verbally abusive and violent to the members of the 10th/11th Street block.

No need for that type of behavior, so on the ban list they go.

Everyone should pass on Donostia as the owner has participated with Gregg Singer in shady and misleading actions in support of Singer's 9th St. dorm project (such as passing out election flyers with a fake "community organization" name on them, and hiring (paid) fake protestors to pretend to be concerned East Village residents in a protest in front of City Hall. Dishonest actions trying to mis-represent the views of concerned East Village citizens.