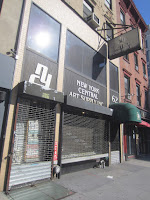 The Steinberg family, who ran the art supply store for three generations, cited "poor business conditions" and the pending sale of the building between 10th Street and 11th Street as the primary reasons behind the closure.

Seemingly out of nowhere yesterday (H/T Bayou!), there were multiple updates on the New York Central Art Supply Facebook page.

At first glance, it appears that New York Central Art Supply has merged with the Jerry's Artarama shop at 111 Fourth Ave. between 11th Street and 12th Street.

This is now on the New York Central Art Supply website...

I reached out to family member Doug Steinberg to find out more ...

OK, this isn't actually new. Doug Steinberg said that shortly before they closed the business, they worked with David and Ira Goldstein, who own Jerry's, to acquire the remaining paper inventory of NY Central Art Supply.

"We felt Jerry's as a family business had at its core, many similar sensibilities, and David, Ira and their daughter Heather, who oversees their New York store, have a mutual love of the industry that my father had," Steinberg said. "I'm not sure what the long term plan is but they have been introducing some new high end New York Central branded products.

"We are not involved in any of their current or future plans, but we do speak about the business on occasion. We're fortunate they came in and saved the beautiful paper we had remaining."

And this is from Heather Goldstein, who manages the Jerry's on Fourth Avenue, via Facebook:

"My grandfather was Jerry and my dad and uncle currently run the company out of North Carolina. NY Central was one of my favorite stores to go to when I was younger. I remember the first time my dad took me to meet Steve and I couldn't believe the amount of art supplies they fit in that space and to make it more special, I remember how warm and friendly Steve was when we saw him.

NY Central was a landmark art supply store with the best paper selection in the world (literally). I wish we could offer everything that they did but we are doing the best we can. When Central had officially closed last year, Steve’s son, Doug, approached our family to see if we would be interested in purchasing the remainder of their inventory, the name, and their vendor lists. I understand that we are not NY Central but I hope to keep the store’s memory and Steve’s legacy alive as best I can."

Jerry's Artarama, a 15-store art-supply chain headquartered in Raleigh, N.C., opened on Fourth Avenue in late 2013. They took over the space from Utrecht Art Supplies, who moved into a new store on 13th Street between University and Fifth Avenue.
Posted by Grieve at 4:30 AM

What ?
And I wondered how Jerry's - who wasn't all that friendly when
they opened - would stay in business.
Wonders never cease.

I've shopped at Jerry's in Lawrenceville NJ - reminds me of Pearl Paint. Interesting they merged here.

Nothing can ever replace the experience of walking into NY Central. To walk on the same floorboards as some of the greatest artists of our time was not only a privilege, it was inspirational.

Yay! They're back! I hope they are as funky as they used to be.

I actually like Jerrys quite a lot. This would be absolutely wonderful- If at least the paper department could be resurrected. Though it would need the expertise of the wonderful NY Central paper honcho David