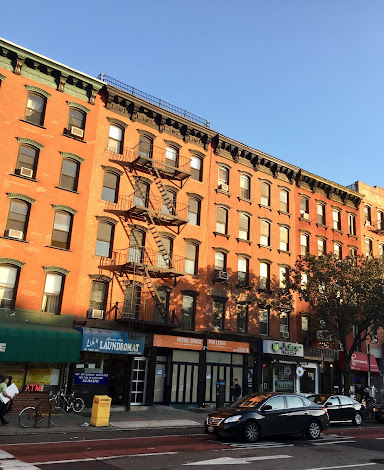 Gothamist has a long read on 192-194 First Ave. between 11th Street and 12th Street, where just a handful of long-term tenants still remain after the Nazarian Property Group bought the building in June 2016 for $13 million.

There's Jean, age 95, who lived in a second-floor unit with her husband for 65 years. She's still there, paying $84 a month for the rent-controlled unit.

Jean says she has felt under siege since Lionel Nazarian bought the building last June for $13 million. He's since put her and a small group of rent-regulated tenants through hell, they say, sending them threatening emails, cutting off utilities, pestering them with buyout offers, and turning their building into a chaotic, illegal construction zone as part of a campaign to force them out of their homes and replace them with market rate tenants.

Without a working buzzer, Jean, who can't walk downstairs alone, is unable to receive guests. She hasn't had a working stove in five months, and last September, as construction crews demolished neighboring apartments, a portion of the ceiling fell in her bedroom. She tripped and fell on the debris and ended up with six stitches to her head.

The post goes on to explore the practice of tenant harassment as a business model, a tactic found in the East Village as well as many other neighborhoods. (Nazarian and his lawyers did not respond to requests for comments.)

Now back to Jean.

One of the retail spaces here was home to the Nepture, the Polish-American diner that closed last December after 15 years in business.

Chelsea Thai, which has operated a stall in the Chelsea Market for 19 years, has signed a 10-year-lease for the space.

The Gothamist piece reports that the Cooper Square Committee is helping Jean and her neighbors sue Nazarian in housing court.

Gothamist has an update on the situation:

"An East Village landlord who tenants say has put them through hell agreed to a judge's timeline to correct hazardous conditions and pay thousands of dollars in fines in housing court Thursday."

One would think Croman's story would intimidate some of the other these other predatory landlords but greed overcomes the fear of a year at Rikers.

I hope Jean and these tenants have called 311 and the mayor's office to report harassment. The city does seem to be taking action in these cases.

Isn't there a new tenant anti-harassment law or some city agency/department that I read about within the past 2 months that is designed to step in when there's a situation exactly like what Jean is enduring? The conditions she is living in are horrendous, and she deserves better.

As for her landlord, I hope his karma comes around very fast, and a tenant anti-harassment intervention even faster.

Fight The Power !
(To Jean and Everyone Like Her )
Hope someone contacts the tenant harassment groups
on her behalf.

Is there anything we can do to help Jean and the other tenants?

Don't give these a-holes any ideas.

Jean is a good candidate for Out & About. She's lived there since 1938 - think of all the stories she must have!

Anyone treating a 95 year old like this is reprehensible. She does not deserve this kind of stress. And, I know this sounds awful, but can't these greedy landlords wait until the elderly tenants pass on? I'm reminded of the woman who lived above Carnegie Hall and had to deal with this disrespectful nonsense at the end of her life.

LOCK HIM UP! Instead of wasting time with Mayor Bill and his promised return of the old PS, Rosie/Rivera should get on the horn NOW to the city attorneys and save this situation for the tenants.

OK, I put in a comment early this morning, and have now just read through the entire day's comments on this so far, and my question is: HAS ANYONE DONE ANYTHING ABOUT THIS? Has anyone phoned 311 or gotten in touch with whoever's in charge of the NYC tenant anti-harassment office?

Or is it up to 95-year-old Jean, who is likely NOT reading this blog, to somehow fight this battle herself, without support from any outside organization?

I don't know Jean's last name, but perhaps someone reading this knows her or lives in her building. This woman should not just be left dangling, with her life and well-being at the mercy of her unsympathetic landlord.

Can anything be done to help Jean. I’m in the neighborhood I can shop for her etc. how can we help her ?

The Gothamist piece I linked to reports that the Cooper Square Committee is helping Jean and her neighbors sue Nazarian in housing court.

I added that to this post for anyone who didn't go over to Gothamist to read the full account.

The Gothamist headline is a good one that was quoted by an organizer. It's not only a machine but it's a complex. The Gentrification Industrial Complex which includes sell out elected officials, indifferent , market speculators/fabricators, the rotten banks approving their loans with no oversight, wormtongue lobbyists, myriad real estate listing websites, and the legion of affordable housing doom REBNY

Now that this scumlord has got away with tormenting his tenants thanks to the DOB's half-assed investigation, Jean and every other tax paying, hard working citizens lives are going to get even more stressful once that backyard is fully equipped with the patio furniture and the speakers blasting EDM all day and night and the high rent paying suckers vomiting and yelling at the top of their lungs. This is displacement by design and it's in your face.

Croman's bust has not discourage these bastards one bit. Frankly, it's going to get worse if de Faustio is re-elected. The next debate coming up better have a question regarding these life destroying tactics.

Wasn't part of the affordable housing plan to PRESERVE the housing already there and available. Somehow 192-194 1st ave got overlooked by this stupid idiot mayor and the 300 dunces working with him

Grieve, it is possible for you to follow up on this woman's story/situation and update us? I think people would want to know if she is OK and what action(s) are being taken to help & protect her.

Let’s help her out. Let find a way to lock this guy up.

Can we start a protest or do something to get attention for this poor lady.