A former intern revisits the summer of 1977 on 7th Street 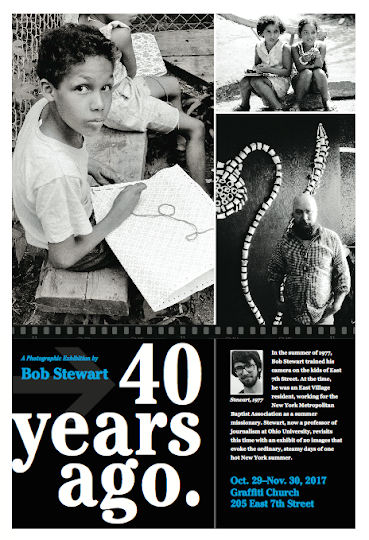 In 1977, Bob Stewart arrived here from Alabama to spend the summer interning for the New York Metropolitan Baptist Association. He spent most of his time that summer on a two-block stretch of Seventh Street between Avenue B and Avenue D. He lived on Seventh and B.

He also had an Olympus SLR, and he took photos during his internship. A selection of these shots will be on display starting Sunday at the Graffiti Church on Seventh Street. The exhibit, titled "40 Years Ago," includes 20 framed photographs and a video slide show.

Stewart later returned to Seventh Street and Avenue B, where he resided from March 1978 to the spring of 1980.

Stewart, who today is the director of the E.W. Scripps School of Journalism at Ohio University, came back for a visit shortly after his granddaughter was born in 2015.

"That’s what prompted me to pull out the negatives and color slides," he told me in an email. "I realized it’d be 40 years in 2017, so I started working on the project."

The following is an excerpt about the exhibit that he shared...

"I was in college in Birmingham when I was offered the chance to go to New York City for the summer," said Stewart. He jumped at the opportunity, spending 10 weeks on East Seventh Street working alongside several other summer interns.

"Mostly, we did puppet shows and sang songs in one of the small parks between Avenues C and D," Stewart said. "We also took kids on a subway ride to one of the beaches, as well as to a Yankees game."

Stewart used his Olympus SLR to photograph neighborhood kids, as well as his fellow summer interns, who, like Stewart, came from outside the city.

"We were mostly suburban college students, mostly from the South, so entirely unfamiliar with life in the East Village," Stewart said.

One of the young interns Stewart met in 1977 was Taylor Field, a Princeton Seminary student assigned to work in Harlem. Field now serves as pastor of Graffiti Church, which will host the exhibit.

"I remember the heartache, the trashcan fires, and the friendliness of the neighborhood," Taylor said.

Amidst their daily activities, Stewart and his fellow college-age interns — like other residents of the city that summer — had to cope with extraordinary events like the citywide blackout that left entire neighborhoods looted, as well as the threat of serial killer Son of Sam.

"Looking back on that summer, I realize now that we lived through a difficult time in the life of New York City," Stewart said. He recalled seeing a guy get stabbed just down from St. Brigid's School, across the street from Stewart's East Seventh Street apartment.

But most of the weeks were filled with the ordinary, steamy days of a hot New York summer, working with about two dozen "regulars," Stewart said. As the kids got to know Stewart and the other summer interns, they became more trusting of each other.

"Whereas we probably saw each other as very different when we first moved into the neighborhood, by mid-summer we felt at home walking down the street," Stewart said.

Stewart's memories were reignited in 2015 when walking his newborn granddaughter around the neighborhood.

"I recalled having a notebook full of black and white negatives, as well as several small boxes with color slides," all taken during the 1977 summer. Stewart bought a flatbed scanner and started working his way through the acetate sleeves of negatives.

The exhibit is up through Nov. 30. After Sunday's opening, the gallery hours are:

Wow. As someone who has resided on 7th and C since 2010, I look forward to what seems to be an amazing exhibit. I am intrigued to witness what our neighborhood was like then. Mr. Stewart also sounds like a remarkable and accomplished man.

I often wonder the rich history of others before me and of my younger neighbors who weren't alive to witness the goings on and transformation during that period in our community. What were their lives like? How did they survive the proliferation of drugs, bloodshed, and mayhem?

That is why photographs are incredibly powerful because they tell a story through the eyes of the subject and what is around them. It's also wonderful he kept the negatives from that long ago. Good on him! Photos such as these should be curated at an actual art gallery. Can't wait to see it :)

Sounds fabulous, can't wait to see pics of the nabe when it was truly great. (Nope, not kidding.)

I think the artist pictured above may be Yuri Karpolov who lived on 7th between C&D and wrote a novel about the neighborhood called Once There Was a Village. Anyone can confirm?

That is Yuri... Bob mentioned him in the email...

I read Kaprilov's book a few months ago. It's a great book and should be mandatory reading for anyone who wants to know about NY history and especially East Village history.

I met Yuri in 1978 or 79, to write a story for a course I took at Hunter College. I took the photo to accompany the story. He invited me to a party at his apartment on Avenue A. Very good guy. Very interesting. And yes, read his book.