Additions to the RIP Memorial on Avenue A 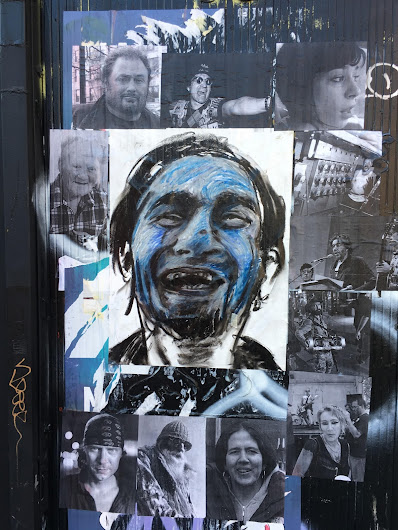 As noted in this post last Wednesday, someone created a memorial on the empty storefront at Fifth Street and Avenue A. (The illustration in the middle has been there since early September.)

This past weekend, more photos were added to the wall (and new ones went up over the photos that were defaced) ... 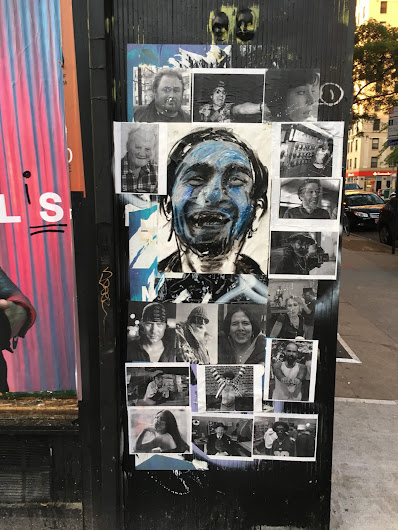 The additions include Abbie Hoffman and Al Lewis, the actor (Grandpa Munster) and Green Party candidate for governor of New York in 1998... and if anyone can help ID the people in the other four new photos... 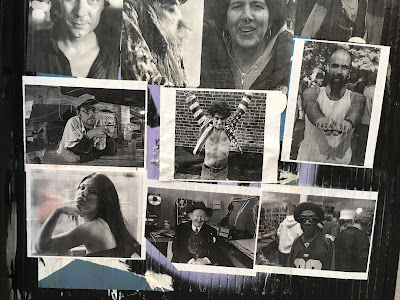 Previously on EV Grieve:
An RIP memorial on Avenue A and 5th Street
Posted by Grieve at 4:15 AM

To the left of Abbie Hoffman is Brad Will.

The Inconvenient Death of Brad Will
Village Voice, November 7, 2006
By Sarah Ferguson

Is that Pope Mickey from dial a joint

"Fuck NYPD Sean" with the tats on his knuckles. And yeah that is Brad Will.

That's a great portrait of LES Jewels. Was just at Lucy's the other day. We used to hang out at the table in the front. After Bob Arrihood died Jewels dropped his pants in the bar as a sign of respect for Bob (who's pictured at upper left). Ave A died when Bob died.

It's crazy to think Ray (from Ray's) has outlived everyone, maybe even us!

Man, the people of this neighborhood. So memorable each and every one. David Peel!

@JQ have you seen Al Lewis in the Coney Island documentary? Oh man! He's a classic!

These are nice memories. My father was friends wth Abbie Hoffman, helped hm renovate a brownstone on Bleecker Street long ago. The stories he told about Hoffman raising hell are amazing. I used to love shaking Al Lewis’ hand outside his restaurant on Saturday night. Grandpa was much taller in person than you’d think, and twice as friendly. Will miss Davd Peel playing every year up at Strawberry Fields. If someone has a Dominique Phlbert ala ERO photo that should go up there too, he is missed by many, even though he still owes me a few of those paintings. Also I’d add Wayne Sawyer aka Joey Zero from Time Takes a Cigarette on Public Access, and a regular at CBGBs. And Amiri Baraka, aka Leroy Jones, whose ex-wife Hettie Jones still lives in the neighborhood. Was also friends of the family, and his daughter Lisa. Keep it going.

The lower two rows of photos seem to me to be:
> Squatter activist Brad Will
> Yippie! founder and political activist Abbie Hoffman
> Squatter/traveler Sean "FUCK NYPD" (His handle obviously came from the tattooed letters on his knuckles -- I never knew his last name)
> Adult film performer and producer Candida Royale
> Actor, comedian and political activist Al Lewis ("Grandpa Munster")
> This looks like a guy I knew who was in the graffiti world, named Chris "Shadow" Lee, though I might be wrong

I don't see Pope Mickey anywhere in these photos

I'll make a note of it. I recall Al being on WBAI a lot as well as Stern's show.

You're right about Basquiat too. Even if his works are impossible to see if you don't have millions to spend.

Thanks Mr. flash for the knowledge of who these people are .As always a great help to all