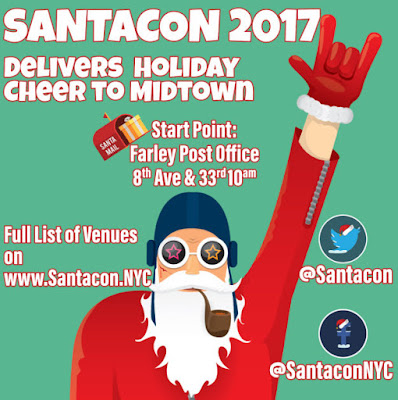 Organizers have announced the participating bars for SantaCon 2017.

The starting point tomorrow — snow is in the forecast — is at the James A. Farley Post Office Building on 33rd Street and Eighth Avenue. From there, some 50 bars and clubs in Midtown, Murray Hill and the East Village will be welcoming the Santas (you need to pay $10 ahead of time for the special Santa badge to enter).

Here is the list of local places [UPDATED: The original list included the Spotted Owl on Avenue A — they are not participating!] ...

Also, Solas on Ninth Street between Second Avenue and Third Avenue is serving as one of the "Santa Clubs" for the day.

The above list is very similar to last year's announced participants in the East Village. (The 13th Step wasn't on that list, though they had one of the longest lines of Santas.)

You can find the rundown of NYC SantaCon bars here.

The official SantaConning begins at 10 a.m. (You still have time to #SitOutSantaCon.) The listed hours are from 11 a.m. to 7 p.m. At 7:01, everyone will quietly return home.

Meanwhile, EVG reader Jefferson Siegel shared this photo from the window at Ricky's on Third Avenue near 14th Street... he notes the Santa costumes each have different price stickers — $4.99 and $5. Hurry and save a penny... 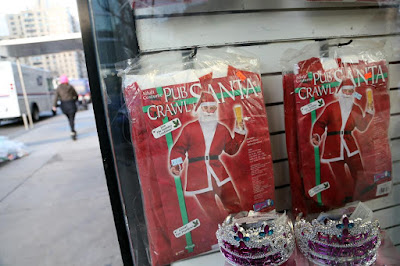 Email ThisBlogThis!Share to TwitterShare to FacebookShare to Pinterest
Labels: SantaCon 2017

So there will be thousands of entitled inebriated dumbshits enabled by the city assembling at Penn Station as they all parade up 8th ave then head east towards 2nd avenue and down, engaging in city enabled civil disobedience, drunkenness,and reckless endangerment. Will this have a cordoned police escort like those seen at various protests?

That's a risky starting point, they might have junkies and crazy derelicts trailing them, and could potentially get attacked by one of them with an accidental bump. Something bad is going to happen this time.

Solas is the perfect host for Santacon! They play Blurred Lines 24/7 and it’s so dark and filthy in there, you can puke for days and nobody would even notice.

Surely these fine alcoholic establishments checked to see that their landlords are onboard with their participation in Santacon?

For example, if one were to ask the increasingly upscaling Westminster, owner of mixed-used 211 Avenue A, if it is OK with throngs of shouting and puking nonlocal individuals descending on their property and making it difficult for responsible rent-paying residents to come and go this Saturday, one would find that the Spotted Owl has this disruptive event requested and signed off on in advance with the owner of the building ... right?

The snow forecasted for tomorrow will add some extra awesomeness🤷🏼‍♂️

at least I now have a list of bars I will never patronize again.

from the perspective of the organizers I'd say they did a good job with that list and locations of containing them to one area this year.

Pinks is off that list now, too. Wonder if they just made this shit up or the bars realized the backlash would be worse than their one day of hell.

It's hard to be a sex santa in the snow but somehow they will manage.

I love how the phony SantaCon flyer featuring the hipster Santa makes it look like the event ‘location’ is in Midtown, when everyone knows this is where the drunk douchbags get off the train at Penn Station and Grand Central before heading straight to the 13th Step. Which as usual isn’t even on the list. All they do in Mditown is take giant selfies with thousands of SantaConArtists in front to the Farley Post Office building and under The Clock in Grand Central, then its off to terrorize children in the East Village one more time. It’s a PR stunt in preparation for the worlds biggest binge drinking Cosplay. Here we go again.

The participating bars don't care, it's publicity for them, naughty or nice.

And the weather forecast of course will make the Santaconners drink more to stay warm and be merrier.

@12:59: Yes, I did notice the "Heil Santa" salute - they are out to offend and threaten as many groups as possible with this vile CON.

It's not about Santa at all, it IS really a CON - one revolving around "fratty alcoholics who have no social skills and think it's funny to grope women". And this year, any women who are sober will, I hope, not take kindly to being groped. Fight back, ladies!

I see a golden opportunity for us to come together as Americans once again.

I can't seem to paste the link here, but see my piece today at splicetoday.com, "A Plea For Unity."

Maybe they'll get snowed in at the post office. All contained in one spot, then shipped off to the north pole.

This is a serious question:
How can we make it mandatory that these idiots come back the day after "Shit-a-con" and clean up our neighborhoods?

Duct tape them to whatever.

Santacon is an annual bar crawl for the overgrown fratbros who hate their parents and live and/or grew up in the suburbs and some have a shared apt. in Murray Hill celebrating their mediocrity.

Ho Ho Ho can’t wait for all the Santa puke

dba on first avenue is aggressively anti-Santa and have been promoting the fact through physical marketing and social media for weeks if anyone wants to have a beverage that is Santa-free. We tried to “boost” our post on Facebook but it was rejected on account of profanity. We stand behind the aforementioned profanity and its intended audience. No bar is a perfect neighbor - and we know we’re not remotely perfect; we do, however, hope that if our neighbors want to have a beer on their day off, they can be guaranteed it won’t be knocked over and puked on by a sloppy monster from Westchester in a Rudolf costume. Xo

Hey Dylon-
So what you're saying is David McWater talks out of two sides of his big Oklahoma Mouth?
Ok at Doc Hollidays but not at DBA? And isn't his partner at DBA his landlord at Doc's?
Part of the problem since the late 80's

LOL “Sloppy Monster from Westchester in a Rudolf Costume” sounds like the latest coma-inducing cocktail at The 13th Step: Order our Hot Kahlua and Peppermint Schnapps surprise, topped with marshmallows and whipped cream, with a cherry on top.

Ticket Alert: I have a feeling the cops will be handing out lots of summonses today (although the snow and rain always make them mysteriaouly disappear). Yesterday at the John Lennon memorial gathering up at Strawberry Fields, they had cops handing out summonses to people walking in fenced off areas. There were even cops patrolling the walking trails back in the bushes, There were cops everywhere. I’m in the park all summer long and that’s the first time I’ve seen anything like that up there. The 9th Precinct just tweeted out this friendly warning to all SantaConners, complete with helpful emojis:

@NYPD9pct
We have extra #NYPD Officers working today for @santacon to ensure everyone have both a good & safe time while being respectful of our neighbors. When it's time to go home use 🚕or 🚂#EastVillage #NYC

Note the phrasing, “...while being respectful of OUR neighbors” and “When its time to GO HOME” use a taxi or the train. Even the 9th Precinct knows these people don't live here.

The last SantaCon when it snowed I watched the whole thing from inside an almost empty Mary Ann’s over a nice hot plate of rice and beans and enchiladas. It was hilarious watching them lined up in the snow and cold outside across the street for hours, since the bars were all over capacity and weren’t letting anyone else in. Over on Third avenue they were all soaking wet and getting turned away by the bouncers from the Penny Farthing and several other bars with No SantaCon signs posted, while Nevada Smiths was completely overcrowded and not letting anyone else in. They all looked so miserable, schlepping around in the cold, unable to find a warm place that would let them in. Alas, there was no room at the Inn. So maybe once these Santas get inside they will stay there, and spare us their inane Kidult behavior and their inebriated, desperate crys for attenton. I for one am going to enjoy the snow.

The Santa party started yesterday behind my bldg on 6th St with a gathering of idiots shouting each other down about how cold it was, yet not bothering to go inside and leave the neighbors alone at 2am. I'm hoping they're too partied out already to do much damage today.

They put up this list, but there are so many other money hungry bars that participate in this. Every year this is the day where we must hide our children so their innocence is not lost too soon as drunken Christmas characters cause havoc through out this great city. SMFH

I quickly ran outside twice yesterday and the Santaconers looked SO pathetic. The one size fits nobody Santa costumes, the “sexy” candy cane outfits - over exposed white legs covered in bruises - all sitting shiver on the sidewalk, caged off like farm animals, surrounded by vomit. Whether you like Santacon or not, the event has run its course.