After Basquiat: the next exhibition coming to the Brant Foundation on 6th Street 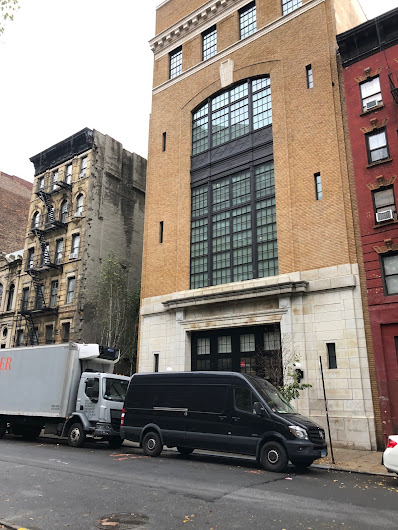 Tickets for the next exhibition at the Brant Foundation will be available starting today (Nov. 1).

There haven't been too many specifics released just yet about what to expect.

The Instagram post about the tickets features a photo of "Dan Flavin's alternate diagonals of March 2, 1964 (to Don Judd)," a colorful sculpture of light that Brant apparently owns...

You can check the Brant site here today for ticket info. (This is NOT a free event. Adults are $15; $10 for EV residents. Students and kids under 16 are free.)

From March to May, the Brant Foundation featured an exhibit by Jean-Michel Basquiat, some 70 works collectively valued at $1 billion. All 50,000 of the free tickets were apparently reserved even before the exhibition officially opened on March 6. Brant later extended the show by a few weeks. 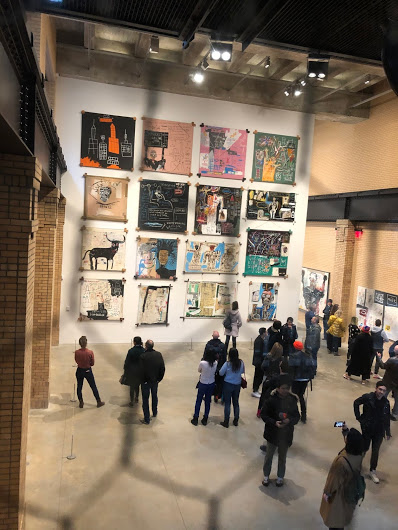 Brant had said the space would host two exhibitions open to the public each year.
Posted by Grieve at 5:00 AM

Look forward to seeing another show there. It is a nice museum to visit. I think is is just the right size and the it is an interesting space in a great location. I don't remember paying anything to visit either.

As a native New Yorker & long term resident of the east village, and working artist, I wish I could afford to rent a studio. Institutions like the Brant should give back to the community and support the artists they further displace. Cultural institutions are used as part of the gentrification process, and this is a whopping tax write off for a billionaire.

Agree with 7:03. Just an excuse to dig out the ol' billion dollar art closet. Nothing in it for new artists.

The Brant Foundation has been a blessing to the community. It's art... It's culture... It's not another bar.

The Brant Foundation is taking a private space and making it public by showcasing art. They have no obligation to do so. Even better, the Basquiat exhibit was FREE. It's great that they're putting on another show, I'll happily attend, getting to see the building alone is worth the price of admission, it's a beautiful space.

How on earth can someone complain about this?

MrNiceGuy said it. This institution, vanity project or not, is great to have in the neighborhood. The Basquiat show was jaw-dropping. No one has to go see this place's shows. We are not entitled to demand this institution give us all a free studio (1 each), or give us anything else free (although I thank this institution for giving our neighborhood thousands of free Basquiat tickets). The tax deductibility argument proves too much: If we object to tax-deductibility of museums, then our objection applies to the Met, MoMA, New Museum, etc. Do we want them all to close down? Whether this institution is a vanity project or not, all this applies just the same. The Basquiat exhibit was fantastic; you, Mr. Anonymous Working Artist, can't argue these guys put on unworthy exhibitions. And certainly you can't object to this institution buying Walter de Maria's old studio, because Wally himself, or his own heirs, sold it to these guys, and got a lot of money in the sale. If Wally (or his estate) wanted to sell it to them, who on Earth are YOU to object to Wally's wishes? I guess your beef is with Wally, not these guys. Let's all be glad this institution is in the neighborhood.

Amen. $15 is outrageous for a private collection that us getting tons of tax breaks for displaying things as a non profit. But i work in the art world so i get it. There should be a locals discount

No one is demanding anything. MoMA & Whitney Highline Estates also complicit w gentrification? 100% they are. Yes, JMB exhibit was great. Happy it was free to enter. Love the kooky American Gothic renovation. Pleased the cool cat who use to have a record store on 9 th street is running things. But still, can’t imagine how someone can complain? *try*. Suggesting mega collectors w vanity projects give back to the community and fund affordable studios for the artists they are displacing- is really so egregious to you? I guess they don’t make em like Samuel Klein anymore- and he wasn’t even benefiting- like Brant & etc. he kept, and requested a legacy to remain, that the top sky lighted floor of Union Sq buildings as affordable artist studios. It’s only within the last couple of years this sadly is ending. Are you taking notes Mr.Brant’s people? Aby Rosen? And how about the wonderful recent news about the Marciano Foundation in LA? Classy. PS: You what the “subsidized “ studios at the Elizabeth Foundation start at? $700 per month. Many artists still can’t afford that.
I don’t mean to go too off topic, however, I’m haunted by this essay , which I *imagine* can be about the issue of gentrification, in place or as well as it’s subject, of fascism. by Fintan O’Toole. Yeah, imagine it’s about gentrification, for a sec, cuz YOU can’t imagine how anyone could possibly complain.... https://www.irishtimes.com/opinion/fintan-o-toole-trial-runs-for-fascism-are-in-full-flow-1.3543375?mode=amp