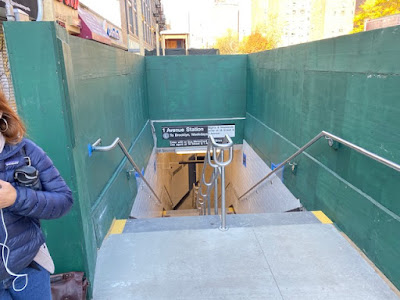 As we were first to report back on Sunday evening, the L train's new Avenue A entrances — the Brooklyn-bound side — opened to the public yesterday morning at 9.

But first! There were speeches and what not... 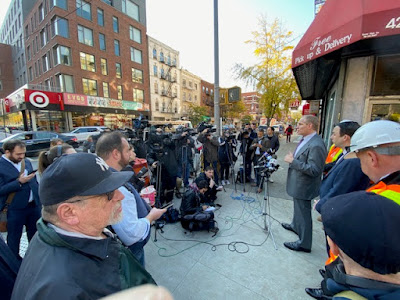 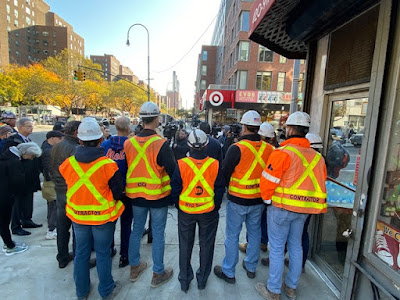 EVG regular Greg Masters, who provided the initial tip about the opening, shared these photos (the MTA noted that the station opened with temporary finishes)... 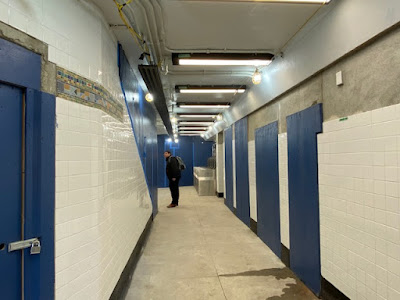 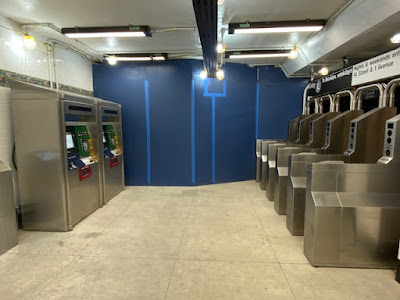 This work has been two-plus years in the making. According to MTA officials yesterday, the majority of work on the 14th Street sidewalk restoration is expected to be completed more than six months ahead of schedule.

When all the construction is wrapped up, the revamped 14th Street First Avenue station will have four new street entrances — two on either side of 14th Street at Avenue A as well as two new platform-to-street ADA elevators that will be ready next summer. (Find more details on this MTA advisory.)

Still no word on when the the north side (Eighth Avenue bound) entrances will open at Avenue A. Meanwhile, the luxury of having entrances at Avenue A and First Avenue will be short-lived.

According to the L Project Newsletter:

Now that the Avenue A side will be open, the 1st Avenue side will close on Nov. 11 for a few months for structural repairs. We have to make sure it looks as good (and has the structural strength too!) to match the new one. The same thing will also happen for the north side entrances. We'll always have two open at the station. 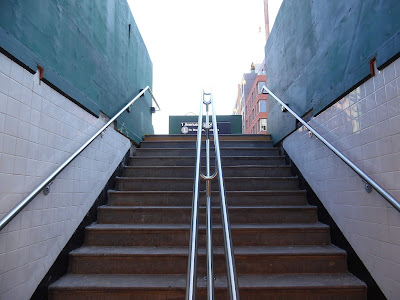 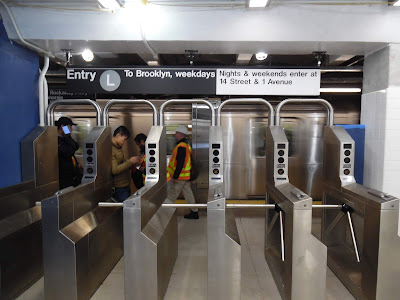 Bedford & Bowery has a few video clips of the new entrances here.

Meanwhile, the L-train slowdown, which began on April 26, is now expected to be finished within a year — reportedly several months ahead of schedule.
Posted by Grieve at 4:20 AM

Why so CRUDDY looking after all that $$$ and time?

@annon 9:01AM
you should read this:
https://medium.com/new-york-magazine/why-new-york-cant-have-nice-things-79febaf90f7f

Really, cruddy. I expected something along the 2nd Av line style. I guess LES doesnt rate.

an unmonitored room at Ave A and 14th St? This will play out well.

Elevators? It’s the least they can do.

I don't understand people who are saying it looks bad. Other than the blue wood that is sure to be removed soon, the tiling and mosaics are to match the stations of the rest of the L line. It would be weird to go with the aesthetic of the 2nd ave line