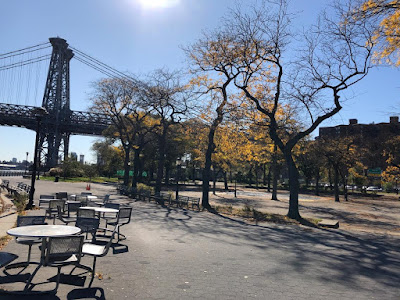 This afternoon (Nov. 4), the City Council Subcommittee on Landmarks, Sitings and Dispositions will vote on the East Side Coastal Resiliency Project (ESCR), the $1.45 billion proposal to protect the East Side from future storm and rising sea levels.

Ahead of that, opponents of the plan, which will see parts of East River Park closed and buried in the years ahead, will rally on the steps of City Hall at noon.

Via the EVG inbox:

East River Park Action, a grassroots group formed to save the park, along with allies, have gathered thousands of petitions against the destructive flood control plan. They will deliver the petitions to the mayor’s office and City Council members. One group collected nearly 2,000 signatures from NYCHA residents, who have been portrayed by city officials as supporting the plan.

“We wanted to shut that argument down,” said April Merlin, who organized the drive. Her group found that people in Jacob Riis, Baruch, and Lillian Wald Houses across the FDR Drive from the park readily signed.

The group will also perform a satirical skit to represent the thousands of community stakeholders who they say are being ignored. “We’ve been testifying at hearings, demonstrating, and calling and writing our elected officials in overwhelming numbers. Yet our Council members are supporting this terrible plan,” says East River Park ACTION founder Pat Arnow.

The group supports adapting an earlier community-developed plan that provides flood control with minimal destruction of existing parkland and biodiversity.

On Oct. 2, the de Blasio administration announced more changes to the city's stormproofing plans for East River Park. Instead of the entire Park shutting down for three-plus years starting in March, the flood protection construction will be done in phases, with all of East River Park remaining open until next fall.

The plan has been making its way through the city’s uniform land use review procedure in recent months, as we've been reporting (see select links below). If the subcommittee votes for the plan this afternoon, then it will go to the Land Use Committee on Nov. 12 and to the full City Council on Nov. 14.

Meanwhile, on Nov. 14, officials from the Department of Design & Construction are scheduled to present the latest details on the plan before Community Board 3's Parks, Recreation, Waterfront & Resiliency Committee. That public meeting is at 6:30 p.m. in the BRC Senior Services Center, 30 Delancey St. between Chrystie and Forsyth.

The fix is in. Per usual. Sad.

The current plan is going to put the LES and EV under extreme environmental stress for years (so much so I can't believe this plan isn't illegal). Air quality is going to go down (and no plan to monitor it during construction or ameliorate the effects), no equal green spaces in the area to compensate, a vast number of plants, trees, insects, bird migrations are going to be very negatively impacted (killed off and buried to put it in layperson's language). East River Park is a special place--just this past weekend I spotted a flock of ruby-crowned kinglets, mockingbirds, butterfly migrations (including monarchs, painted ladies, buckeyes), pollinators, red-tailed hawks, so much beautiful native plant species changing color with the seasons. People fishing, catching all sorts of marvelous fish. Kids bicycling, enjoying the tide going out. A mystery duck hanging out by the pier. People planting bulbs and cleaning up weeds, caring for their community. Why can't New York City care too? Why can't NYC lead the way and add wetlands to extend the park out, protecting more sustainably against storm surge, working WITH nature instead of killing it off? Or deck over the FDR to add more desperately needed parkland while reducing auto emissions and noise? Instead, NYC is bulldozing over the community both literally and figuratively, adding to the very same climate change that is causing the problem in the first place. So shortsighted.

November 4, 2019 at 1:20 PM - its only shortsided if you have the misfortune to be a citizen who actually lives here. the longsighted plan will turn this into a wonderful space once they get rid of all the public housing on the east side, and that is on the books. if you think this is effed up, wait to see how Brooklyn deals with rebuilding the BQE. The city is going to be near destroyed. And then we'll all be irradiated in 5g! Its gonna be great.

The city's plan to destroy a park with nearly 1,000 mature trees that have already survived hurricane Sandy makes no sense.

A link to the change.org petition: https://www.change.org/p/mayor-bill-de-blasio-save-east-river-park-urge-nyc-to-develop-a-resilient-plan-with-consensus-from-community?recruiter=1005757590&utm_source=share_petition&utm_medium=copylink&utm_campaign=share_petition

November 4th, 4:18pm
Not everyone has the good fortune of being around for a long time.
When you find something that to some people might be too good to be true, like this park along the river, one should not let it go.
Life is too short to let what you love go.

Excerpt from curbed article - "Would new development rise on the two city blocks-worth of new land? And how would this impact the marine life in the East River, which only recently has bounced back from decades of pollution?"

"A concrete price tag has yet to be determined and is dependent on the final project, but the city has already begun advocating to state and federal officials for funds; it is also exploring how private dollars could support the effort, according to Hutchinson. Constructing new buildings on that landfill will be explored further by the consulting team..."
https://ny.curbed.com/2019/10/1/20893221/lower-manhattan-expansion-plan-planning-process

Why do they even bother with these public reviews? They never listen.

This is atrocious. You don't destroy this entire ecosystem. There are other ways. Not to mention the park they will end up making will be barely green, all fake and sterile BS with parks cops on your ass like on the West Side.